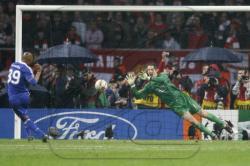 One answer to the question Where did it all start to go wrong for English football ? is Boothferry Park in Hull, the venue for the first game in England decided by the dreaded penalty shootout. There are many suggestions as to who came up with the idea, the more frivolous but still persuasive including the Marquis de Sade and Vlad the Impaler, though it is unlikely either sat on the committees refining it for use under the auspices of the FA.
The match where the inaugural ordeal took place was a semi-final of the lost and long-forgotten Watney Cup  actually an interesting event contested by two teams from each division, qualifying as the highest scorers not to have made it to Europe or won promotion. Eight teams, straight knock out, no replays, so penos to decide any games tied after extra time.
After 120 minutes Hull and Manchester United were level 1  1. Rather fittingly the first to step forward to take a penalty was well-known gambler and one of the greatest players to pull on a pair of boots, George Best . He scored, as he did so often on and off the pitch, hitting the ball to his left. Dennis Law was the first to miss with his effort; two Hull players failed, however, and United triumphed, though they lost 4  1 to Derby County in the final  all Guildford mourned. By way of interest, the next two Watney Cup finals were decided on penalties, Colchester United beating West Brom in 1971, and Bristol Rovers overcoming Sheffield United the following year.