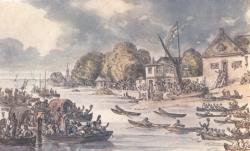 After the Kiplingcotes Derby in Yorkshire, the annual Doggetts Coat and Badge Race that takes place on the Thames in London is the oldest sporting event in Britain that has been competed for more or less continually since its inauguration.
The race was endowed by Irish comic actor and theatre manager  he ran Drury Lane for a time  Thomas Doggett. Various explanations of why Doggett founded the race have been given over the years: his Whig politics for one, as the race took place on the first anniversary of George Is accession and the badge that forms part of the prize bore the Hanoverian Horse; a rescue from the Thames by one or more Watermens Company apprentices  it is they who have competed for the prize from the start  is another.
When Doggett began the tradition  he endowed it forever in his will of 1721  the young men rowed in small wherries designed to carry cargo and passengers on the Thames; now they use lightweight skiffs that would not be out of place in the Olympics. And they used to row against the tide, now they have it helping them.
According to the Company of Watermen and Lightermen, per research undertaken by a Mr Robert Cottrell, the first winner was a John Opey or Obie, from Bermondsey , the first recipient of the much prized watermens coat and silver badge.