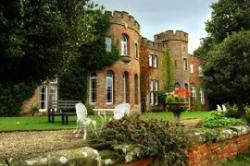 Did you know that the 1st mainland pillar box went up on Botchergate in Carlisle in 1853.

Did you know that Carlisle could claim to be the most cosmopolitan city in Britain  in terms of rulers? It was founded as Luguvalium by the Romans; when they left in the early 5th century the Picts took it over; the Vikings were next on the list; and the Scots displaced them. The Normans added Carlisle to their territory after the Conquest; the Scots retook it in the 12th century; and the English got it back later. It even fell to Bonnie Prince Charlie in 1745.