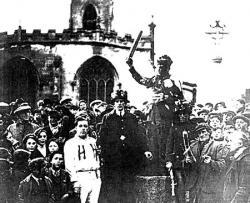 The tradition of Haxey Hood is somehow typically British, a mad mixture of formality and anarchy, ending in a pub. It is claimed to be the oldest surviving British folk custom, though many other places would dispute that honour.
Haxey Hood is a game that takes place every Twelfth Day, January 6, unless that date is a Sunday in which case it moves to Saturday 5. The village of Haxey is in North Lincolnshire, and it was once even more remote than it is today, part of the Isle of Axholme, a rise in the land surrounded by marshes before it was drained.
It is said that in the 14th century Lady de Mowbray, wife of the Lord of the Manor, was out riding when her silk hood was carried off by the gusty wind. Thirteen farm labourers were nearby and they gallantly gave it chase, perhaps knowing its return might bring a reward. The chase became a bit of a struggle, the hood changing hands and at times being blown away again. Eventually one man held on, but was too shy to approach the great lady so he passed it to another who returned it to her. Lady de Mowbray had watched the tussles in amusement. She dubbed the shy winner Fool, and his bolder companion Lord. As the men had sunk into the mud she had cried they were boggined, and all bar the Fool were henceforth to be called boggins. So pleased was the lady with her day that she gave 13 acres to the men on the understanding the game would be re-enacted annually.
That is one story. Other suggestions are that the game is linked to the bog burial of sacrificial victims, or that the long leather tube used as the hood is a phallic symbol, or that at one time an actual bulls penis was used, though precious little evidence for this exists. Somewhat prosaically it is also thought the game may be derived from the marking of common land boundaries.
In the week preceding the event the 13 officials tour local pubs to obtain money. This is now for charity though once it financed the celebration. They do so in full regalia  The Lord of the Hood and the Chief Boggin in red jackets (sorry, hunting pink) and black top hats decorated with flowers and leaves, 10 other boggins in red jackets or jumpers, and the Fool in motley with swatches of cloth and tatters sewn to his uniform. The Fool, however, does not have his face painted until the day of the game.
On January 6 the 13 officials tour the local pubs, decorating the Fools face in the traditional start of the mini-crawl, The Carpenters Arms . The tour completed the Fool makes to escape, but is caught and hauled to the church, kissing unwary women on the way as is his right. At the church he makes a speech for as long as he can while standing on the Mowbray Stone, a mounting stone once the base of a cross. His speech is curtailed by smoke from a fire lit behind him smoking him out  though this is the civilised version - it is said the Fool used to be swung from a tree over a fire until he nearly asphyxiated. The Fool ends his speech with some traditional lines in dialect, translating as House against house (house being pub), Town against town (Haxey against neighbours Westwoodside), and entreating men to knock one another down, though not to cause hurt. All then move to Haxey Hill.
Before the real event there are gentler versions for children, but at around 3pm the ground is cleared of children, and about 200 adults occupy it. The hood, a long tube of tightly sewn leather, is thrown in the air, and a giant scrum forms around whoever catches it. This is the sway. The hood cannot be thrown, remaining in the sway as upwards of 200 push it in the direction they want it to go - their pub. Four pubs are the goals: The Carpenters Arms, The Loco, The Kings, and The Duke William . The sway may collapse and reform, it can swing round, but it moves inevitably to one of the four pubs. Hedges and even walls are crushed, and recently people were foolish enough to park cars in its path, only to see them shunted into one another. The boggins try to ensure safety, but controlling a 200-man maul is not easy.
When the hood is handed to the landlord or landlady of the pub at which the sway ends up the game ends, and the hood is kept in that hostelry until the next game a year on. Free drinks for competitors are supposed to follow victory, but the cost of these is surely more than offset by the celebrations that continue long after the conclusion of the contest. Its thirsty work pushing and shoving for three hours or even longer