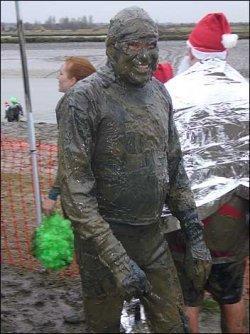 So many things seem like a good idea at the time when the time in question passes in a pub. Such was the case with the original idea that eventually became the Mad Maldon Mud Race. Legend has it that a tuxedo was involved in the first scenario devised in the pub; that the dare would have involved serving a meal as part of the challenge; and that a barrel of beer was at one time the marker across the water.
That was back in the 1970s. Nowadays the turn of the year event in Maldons Promenade Park is a big charity affair, with hundreds of competitors taking part under the watchful eyes of the local Rotary and Lions clubs. Fancy dress is still a big thing  many of the competitors dress for the occasion, and a prize is given to the best outfit  but not compulsory, unlike the taping of footwear to the runners feet.
Although the race is timed to coincide with very low water in the Blackwater River, the current can still be powerful, and the terrain makes every yard a struggle, each runner inevitably caked in the silty-salty mud within seconds of starting. In racing terms the going is always soft; stop and you begin to sink into the river bed.
It is an excellent tradition. Thousands watch the race from a safe distance  its better than The Great Escape again; hundreds compete; and large sums are raised for good causes. Sad the beer is no longer a component though.