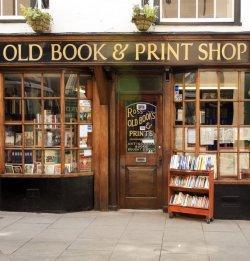 Getting Bookish at Hay-on-Wye

For those of us who love nothing more than browsing among bookshelves, Hay-on-Wye is the place to go. This small Welsh town (just over the border, though the Post Office finds it easier for some reason treating it as part of Herefordshire) may have a population of fewer than 1900, but it houses nearly 40 bookshops selling volumes old and new.
Much of the credit for Hay becoming the town of books goes to Richard Booth, who opened his first shop there in the 1960s. With energy and creativity his business expanded  it now claims to have the largest turnover of any second-hand bookshop in the world  and various people trained by him have established their own businesses. His stunt in 1977 (on April 1 of course), declaring the town independent and making himself its King garnered much useful publicity.
The growing number of shops has attracted bibliophiles from round the world, some merely to visit one particular store specialising in their field: the Poetry Bookshop which opened in the mid-1970s; childrens bookshops; one focusing in linguistics; a specialist detective bookshop; antiquarian dealers; and many more.
Not unnaturally someone eventually had the bright idea of establishing a literary festival in Hay, and since it first ran in 1988 it has become a major part of the cultural calendar, nowadays sponsored by the Guardian, though it is a myth that the newspaper referred to it as the Hey-no-Way Festival. Starting during the last days of May and carrying on into early June, the festival draws authors and fans from far and wide  Bill Clinton memorably dubbed it Woodstock for the mind. Less well-known is the musical festival there, which happens in July.
We have four places to stay in or very close to Hay-on-Wye: with a nicely literary name the Baskerville Arms in Clyro just a mile up the road; the Swan at Hay is a former coaching inn now a hotel and restaurant; bang in the centre of the town is The Old Black Lion, dating back to the 17th century; and The Seven Stars which is even older, built in the 16th.
Given that Hay is at the northeast tip of the Brecon Beacons National Park, with the Black Mountains looming a short drive south away from the litfest, if you fancy a break from the highbrow and browsing then a walk in the hills will refresh you. What surprises some visitors to Hay who arrive knowing its reputation as the worlds second-hand book centre is how far it is from any major towns. Brecon is about 15 miles away, worth the drive to stay at the historic Brecon Castle Hotel just one of the 11 places we list in the town and its surrounds. The nearest city to Hay-on-Wye is Hereford, some 22 miles distant, but worth considering in a combined trip  Hereford is a delightful old place, with a magnificent cathedral: Information Britain lists 25 hotels and other types of accommodation there, including the ideal country house hotel in Holme Lacy House; and the Victorian splendour of Munstone House Hotel.
If you prefer to make your base in the countryside, then the area has plenty of that. Llangoed Hall offers Edwardian country house luxury just minutes away from Hay, near Llyswen. Peterstone Court is another elegant place, a bit further afield at Llanhamlach; closer to the literary action is The Harp in Glasbury, a proper country inn; or if you prefer to fend for yourself, Welcome Cottages have houses in the area.
There is of course more to Hay than books, though for many visitors books will be enough. The castle is a fine sight; Hay remains a market town with some pleasant pubs in which to pass the time away, with or without tome in hand; there are enough narrow old streets for a stroll to escape bibliophiles for a while, and the relaxed feel of a place where culture is more important than commerce, though the two here go hand in hand. If you need variation in your retail therapy, then Hay also offers some renowned antique shops. Should Hay Castle have given you a taste for such structures, there are plenty more within a few minutes drive: Painscastle to the northwest; Longtown Castle over the border; Aberllynfi Castle south of Glasbury and Boughrood Castle to its west. The Welsh Marches were for hundreds of years a place where you slept easier if you had thick high walls to protect you from visitors. These days visitors are the lifeblood of the area, and the chances of having boiling oil poured over you on arrival roughly zero. Thank goodness the pen is now far mightier than the sword, at least in Hay.