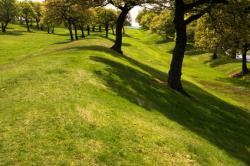 We all know what and roughly where Hadrians Wall is. But not enough of us are aware of its younger and more adventurous brother, the Antonine Wall, the fortification built by the Emperor who succeeded Hadrian.
Since 2008 the remains of the Antonine Wall  and there are plenty  has been on UNESCOs list of World Heritage Sites: up there with Egypts pyramids; the Statue of Liberty and The Palace of Westminster. Surely then it is worth a weekends trip to discover this historic gem on our doorstep?
A bit of history: Antonius Pius reigned from 138 to 161, succeeding his adoptive father Hadrian. Emperors needed victories to cement their authority; Antonius decided his would be pushing the Empires frontier north, securing it with a wall across the isthmus between the Firths of Forth and Clyde , using the valleys of the rivers Carron and Kelvin. Dont expect high stone walls. Unlike Hadrians more solid version, the Antonine Wall was built of turves albeit stacked on a stone foundation. It had a ditch to the north, the spoil from which formed a further rise beyond it, and a military road behind. Work began about 142, but 20 years later the legions retreated behind Hadrians Wall again, only briefly reoccupying it in the reign of Septimius Severus in the early 3rd century.
Its possible to hike along or near the 37 mile line of the wall from Old Kilpatrick on the Clyde to Boness on the Forth; but at its extremities much of this route would be through urban sprawl  though the bath house at Bearsden in Glasgow and that citys Hunterian Museum where youll find many engraved distance marker stones are both worthy of a visit. So too the Kinneil Fortlet on the western edge of Boness on the Edinburgh end of the wall. But to get the best idea of how the wall once divided the land three or four central sites stand out.
Bar Hill Fort sits in the middle of a triangle with Kirkintilloch , Kilsyth , and Cumbernauld at its points. The forts outline is very visible, roughly square, set back from the line of the wall where the single main ditch is evident, double ditches guarding its other sides. A couple of miles east is Croy Hill, where thanks to basalt rock the legionaries gave up digging the ditch for a short distance; here the outlines of various buildings remain. And you need little imagination to take in the views east and west and put yourself in the sandals of a centurion.
For Bar Hill and Croy Hill hotels in Cumbernauld like The Westerwood (with its own golf course for a change of activity); or the Premier Inn if you are keeping costs down are both well situated. Or near Kilsyth there is The Boathouse with the lure of its out of town canal-marina setting; or the Coachman Hotel in the town itself. And Kirkintilloch offers Smiths Hotel with a choice of bars in which to discuss your archaeological ramble.
Rough Castle a little to the east of Bonnybridge is arguably the most fascinating of the Antonine Wall sites, in spite of being one of the smallest forts. Not to be missed here are the lilias, oval pits north of the ditch in a configuration that would have made charging the wall in numbers impossible  the pits once contained spikes. The Roman Road is also evident still, and traces of the barracks, bath house and granary.
In Falkirk which is a short drive away from the Rough Castle site youll find the Inchyra Grange Hotel , a converted manor house; the Hotel Cladhan near Callender House ; Falkirks Best Western right in the heart of the town but in the greenest of settings; or further east in Redding the Ashbank Guest House  with guest pick-ups good for those wanting to tramp a section of the wall  around Falkirk there are some of the more impressive bits of ditch, giving an idea of the barrier the Caledonians faced before they could get at the invaders.
Glenskirlie House and Castle in Banknock , near to another site on the wall, Castlecary Fort, is conveniently located between the Bar Hill and Rough Castle sites; as unsurprisingly is Castlecary House Hotel , both making a good base for exploring those two locations.