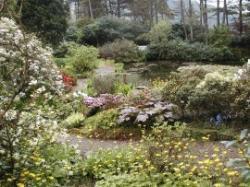 The idea of creating great gardens on Scotlands North West Coast, let alone gardens full of exotic plants, may strike some as strange. Yet in similar latitudes to Hudsons Bay and Moscow Scottish gardeners have for more than 150 years done just that in relatively temperate microclimates provided by sheltered locations and the warm currents of the North Atlantic Drift flowing from the Caribbean.
While Inverewe Gardens are the best known, there are many others worth taking in. A tour of the gardens could be the basis of a trip to the region. Or visit just one of them to do something different  a gentle stroll admiring plants offers a chance to recover from Munro bagging or studying the distilleries!
Heading north from Glasgow on the A82 along the west shore of Loch Lomond then taking the A83 you will quickly find two fine examples of West Coast gardens: Crarae , which with its fantastic collection of rhododendrons in a rocky gorge conjures visions of the Himalayas; and Ardkinglas Woodland Garden , most famed for its magnificent collection of conifers. Equally fine accommodation abounds in the area too: get a taste of the regions history in Minard Castle south of Inveraray ; or sample country house hotel luxury at Loch Fyne Hotel or The Argyll .
If you prefer settling in one spot and venturing forth to explore the gardens from there, Scotland Cottages has houses full of character all over the area.
Continuing round the coast on the A83 then striking north again on the A816 brings you to Arduaine , recently reprieved from closure by the National Trust for Scotland (owners of several of the places described here), which thanks to the Gulf Stream reckons on having something in bloom just about every day of the year; and though it doesnt shout about them contains tree ferns and palms for the plantsman to seek out.
Oban a few miles further north has some fine places to stay right in the town: the Oban Caledonian ; the Royal ; the Lochnell Arms ; and the Oban Bay Hotel . Or venture a few miles further afield to find beautiful spots like the Falls of Lora Hotel ; the coaching inn comfort of the Taynuilt ; and the waterside splendour of the Portsonachan . From Oban the ferry takes you to Craignure on the Isle of Mull . Have a rest from driving  take the miniature railway from the ferry terminal to Torosay Castle , which has a Japanese garden and Italian statuary in its 11 acres of grounds.
Another ferry a few miles along the A849 gets you back on the mainland and heading north to Mallaig and  yes  another ferry between Mallaig and Armadale on Skye , though the bridge at the end of the A87 is an alternative way onto the island. In Armadale at the Clan Donald Visitor Centre you will find 40 acres of gardens that includes some strange and exotic trees; the famous Dunvegan Castle on the northwest coast of Skye has water-gardens and formal-gardens that contrast with some of the others in this itinerary.
Skye caters for large numbers of visitors, and Information Britain lists many: why not consider The Three Chimneys or Roskhill House in Dunvegan ; Kinloch Lodge in Sleat; the splendid Uig Hotel , luxurious Cuillin Hills Hotel , the cosy Glenview in Staffin... there really are too many to mention. Or prolong your stay, booking one of the Cottages on the Isle of Skye.
Just over the mainland side of the Skye Bridge is Balmacara where youll find Loch Alsh Woodland Garden , which along with some mighty trees has bamboos and ferns to admire.
On again northwards hugging the coast on the A896 and A832 which bring you to the jewel in the crown: Inverewe Gardens. Its sometimes hard to imagine you are in Northern Scotland as you walk among the exotic plants - it contains four national collections to fascinate the experts among us. But with stunning views over the bay which shelters the spot, even for those not bothered with botany it is a fabulous place.
Ullapool a few miles to the east has more gardens: just outside the village is Leckmelm Arboretum , with a walled garden; and after a winding drive along smaller roads youll find the last garden on this list, and a different type again: Achiltibuie Hydroponicum , dubbed the garden of the future, open between Easter and the end of September. Ullapool also offers plenty of places to stay: the Caledonian Hotel , the Ferry Boat Inn and the Argyll Hotel to name but three.
Try this trip and youll never forget the gardens, the lovely coastline, or the hospitality. Most of these places are open year round, but opening times are subject to change so its always worth checking in advance of your visit.