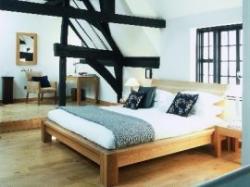 Add your review
The Hotel du Vin has been created out of an old brewery and a very nice job they have done with it too. Most sympathetic. It stands in the centre of very pretty (though a touch twee) Henley and is well staffed. Our room was nice (well actually the Bathroom was lovely, room OK) if a little grubby - in an industrial chic kind of way. The night we stayed they were very busy and it was hard to find a space in the bar or public areas - let alone a seat. The public areas are nice mind you - just not big enough and the central courtyard a good space but not of course in the sub zero temperatures that we found ourself in. Any gripe would be the Restaurant (or bistro) where we found the food on offer distinctly average though we may have been spoilt by eating in a michelin starred pub for lunch (Michael Parkinsons Royal Oak at Paley Street) which may had some bearing on the situation. The wine list is of course extensive as one would expect and we found it to be very expensive - our Barolo was £69, way way over the top. But maybe that is just us