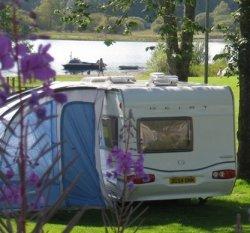 Add your review
I've been arranging an annual fishing trip for myself & 7 other anglers for the last 3/4yrs at Loch Ken and i've always found the staff to be nothing but helpful. Communications during booking etc has been 1st class. We don't always catch fish but we keep coming back because we choose to & we all enjoy it! If you don't like a place don't go back back, but don't put others off because of your opinion. I + 7 others will vouch for the site and this year there'll be 12 of us enjoying it. Nice to see the owners answering the negative reviews with a positive attitude. Usually other sites ignore them. Hope you have a great 2011.

Date visited: MAY EACH YEAR

Add your review
Have now been to Loch Ken for the second year but this time for 2 weeks both myself and my husband love the place that much we have booked again next year .Yes there have been things that have not been right but we must say that the campsite has improved and continues to to do so with a very hard working couple now at the helm .The showers and toilets are cleaned and checked several times during the day by very friendly staff and there are things going on on the site .There were no problems with rubbish and the kid now have 2 play areas and a football pitch to run off their energy .All in all Loch Ken is a beautiful ,clean, friendly place for a holiday for both campers and caravaners alike.

Add your review
We have visited the holiday park for many years now,with the children when they were small and as teenagers. infact we are going again in 4 weeks camping for 10 days. In reply to the person who was complaining. Last year was an exceptionally wet summer that is why your tent pegs would not stay in. I have never found the staff rude and they are always helpfull. As for the toilets, rubbish ect. There was a young lad cleaning the toilets and collecting the rubbish I hadnt seen him before but he definatly wasn't up to the job. The toilets were a bit dirtier than usual. I would definatly recomend this site.Do not let this review put you off.This is a gem of a campsite.Peacefull & friendly And definatly safe for kids.Come and see for a days visit. You wont be dissapointed.

Add your review
i am writing a response to the review i have just read. I can only apologise for the mistreatment you recieved from our staff. My father started Lochken holiday park in the early 70's. This year my wife and i have taken over the running of the business. We are aware of the changes that have been needed over the last couple of years. We are young and enthusiastic. Since January we have been working hard to turn the business round. We have made a number of changes and continue to do so. Please come and stay with us and we promise to make your holiday an enjoyable one, with friendly, helpful owners and staff, and up to date, clean facilities.

Add your review
Loch KEN Staff - It appears to be run by a family. Which ideally is perfect but not in this particular case. Originally on calling to enquire about the camp and it's facilities a week prior to going a lady answered the phone and speaking to her and asking advice, she was quite rude. I thought nothing of it as she could just be any member of staff and I was not going to let that influence me. Upon arrival it was the same woman and she was rude (I found out later she was one of the owners!). She was abrupt and seemed not to care. Later on the same evening I met her husband who was polite and well mannered. I unfortunately had to leave early the next morning due to personal circumstances and I wished to notified the owners that i was departing. The woman was there and she was again rude. Cleanliness (Tent field, f/toilets, m/toilets , shower facilities) - The tent field was quite damaged, and did not drain well at all in the rain...so much so that the tent pegs would not remain in the ground and the tent was at risk of being blown away due to high winds with so little support from the ground. Also where I had to pitch our tent had litter and rubbish scattered which appeared to have been there a while. The f/toilets were dirty, full of flies, and the showers were too dirty to be used. The m/toilets were much the same including shower facilities. There are boating facilities, however the boats are in a very poor condition and full of litter. But more worrying is that fact that the boats were not tied up and any CHILD could be lost!!!! My last point I will make is - I arrived on the Friday and I paid for the two nights in advance which in total was £30 (£15 per night). Despite the awful conditions (which i would have left for anyway), I received a phone call from home which demanded my immediate departure. I went to the office, not to complain, but to ask for £15 back for the Saturday night. I was rudely spoken to by the lady again and was rejected. Camp policy there is that campers must depart before 12 noon as staying longer campers would be charged for and extra 1/2 day. Which is fair enough, but not if it's the other way around. No refunds given...not matter what. HOWEVER it states NOWEHERE on the website or at the CAMPSITE that no refunds are given. Thus i will be taking out civil action. My advice with regards this particular campsite would be not to go. I have read other peoples reports (some of which I agree with), but it is definately not as nice as people suggest. Unless you have the super tent, and super patience for rude staff, and poor conditions, this is not the campsite for you.

Add your review
My partner, Melissa Mc Callum ,and I enjoyed our 2 night stay,a real treat was seeing for the first time a red kite which flew overhead plus watching a treecreeper [ small bird] walking straight up a nearby tree.Overall everything was satisfactory,we hope to go back.

Add your review
Called in by chance for a tenting weekend. This is a lovely site right on the shore of Loch Ken. Ideal for the Fishing mad type of camper. The site has Statics and Tourers and the camping field is Spacious but on a hill. If you are pitching a tent call 1st and book a pitch. The Shower Block is clean there is also a washup point and laundry with Chem Toilet facilities. The shop is well stocked but lacking a lot of camping spares. Such as tent pegs etc etc etc. The major draw back on this site is that there seems to be no Overnight Staff on the Park. Our arrival was marred by misinformation given out by another camper. Who told us just to pitch anywhere and sort it in the morning. We put our tent up in an area that was out of bounds to tents, it was not marked, and in the morning we had to drop it and move it to the Tent field. Another point was that due to no overnight staff a couple of campers (2 families) were drinking too much and became rather roudy which was a bit intimidating. But they settled early. The morning we left I witnessed something so stupid it was beyond belief. A family in the ten t field had brought along a High Powered airrifle and they started to fire againt a self made target against a fence. The problem was beyond the fence there was the campsite play area. with kids in it. Over all apart from the three points mentioned above we found this site to be one which we would definately return to for a quite camping holiday.