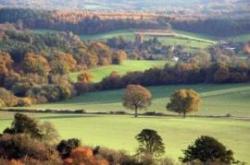 Dorking
Did you know that Charles Dickens wrote much of his "pickwick papers" whilst staying in Dorking at the White Horse and based many of the characters on local people ?
Did you know that Dorkings Emblem, the unique 5 toed cockerel was left here by the Romans ?
Did you know that Denbies , just outside the town on the A24, is the largest Vineyard in England
Did you know that Vaughan Williams once wrote a concerto for the mouth organ.
Did you know that St Martins Church spire in Dorking is the second tallest spire in England and the tallest church spire - beaten only by Salisbury Cathedral
Did you know that the town is home to the only surviving house of a Mayflower pilgrim. William Mullins left on the ship in 1620.
Did you know that Abinger Common (5 miles from Dorking) is the oldest village in england with dwellings dating back 7,000 years.
Hampton Wick
Did you know that the first specialist plastics factory in the world was established in Hampton Wick? Industrial chemist Alexander Parkes patented his material modestly named Parkesine in 1861 while he was employed by a Birmingham metal works, and what is thought of as the first true plastic garnered great interest at a trade exhibition in London the following year. The Hackney Wick factory set up in 1866 was his own venture: sadly it failed as skimping on raw materials led to variable quality - and Parkesine was extremely flammable.
Weybridge
Did you know that James I chose Oatlands Park near Weybridge as the centre of his proposed silkworm industry? Inigo Jones designed a silkworm house; John Tredescant was in Charles Is reign appointed Keeper of His Majestys Gardens, Vines and Silkworms there; and a major national push was made to plant mulberry trees for the worms to feed upon. Unfortunately in true bureaucratic style they planted black mulberries, nice fruit great jam but not the white mulberry on which the silkworm thrived. The wrong sort of mulberry, in other words.
Woking
Did you know that the Shah Jahan Mosque in Woking was the first purpose-built mosque in Britain, and that it dates from 1889? It was the brainchild of polyglot polymath orientalist Gottlieb Leitner. The mosque is named for its original benefactor, Shah Jahan, Nawab of Bhopal.
Did you know that when the Martians first land in H.G. Wells  book 'War of the Worlds' they do so on Horsell Common, where Wells lived at the time? The town centre commemorates the link with a statue of a Martian tripod.
Did you know that Brookwood Cemetery in Woking is the largest in Britain? It is also a Grade I Historic Park. It was opened in 1852, 2000 acres of land having been secured for the purpose: among its famous graves are those of Dame Rebecca West, lover of H.G. Wells; and the above-mentioned Gottlieb Leitner.