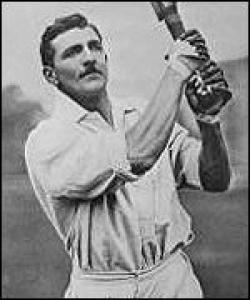 Even as a young man C B Fry was recognised as being quite an extraordinary talent. He took the term all-rounder to the extreme. He is known to have excelled at a number of sports as well as being an outstanding teacher, politician, writer, editor, and publisher.

Cricket commentator John Arlott described him as 'probably the most variously gifted Englishman of all time'. Although cricket was the game in which C B made his name, he also made a profound mark in other sporting disciplines. In his first year at Oxford he broke the English long jump record and was capped for England for the first time at association football. He improved further in the long jump in his second year when he equalled the world record.

Whilst at Oxford he captained the cricket, athletics and football teams all in the same year. To fill his spare time, he also played rugby union for Oxford University, Blackheath and the Barbarians! He is also known to have excelled at boxing, golf, swimming, tennis, throwing the javelin and sculling.

His cricket career included periods at Sussex and Hampshire, as well as his time at Oxford University. He had an average of 50 in a first-class cricket career in which he scored over 30,000 runs. Today an average of 50 would be impressive enough but back in the days of C B Fry, when pitches were not as well prepared as today, such batting averages were very rare indeed!

He also played association football for one of the most famous of amateur clubs, the Corinthians. He subsequently turned professional with Southampton FC, appeared in a losing F A Cup final for the Saints, before moving to south coast arch-rivals Portsmouth FC.

Unfortunately, he suffered from mental health problems, which first reared their head in his final year at Oxford. A mental breakdown there meant he left with a poor degree, despite his academic brilliance. In the 1920s the problems returned and he developed many a paranoia and odd habits; such as running naked down Brighton beach.

Contributors: Do you have a site related to C B Fry?
Supply some content for this page and we will gladly add a link to your site. Email here.