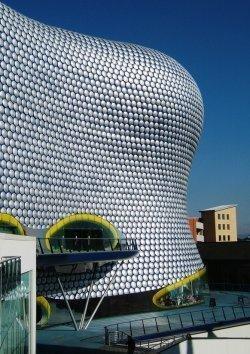 All roads lead to not Rome but Birmingham, or at least they do if you look at a British roadmap. Same with trains. The city once the heart of our engineering industry has been transformed of late, new buildings and makeovers of old ones polishing what was a rough diamond  how apposite that its most famous retail area is the Jewellery Quarter.

Before we outline the seasonal reasons for visiting the capital of the Midlands, lets take a quick look at three of those new and refurbished facets of Brum. The structure that more than any other epitomises all the positive changes is the Selfridges Building, part of the revamped Bullring complex, a fun and beautiful example of the Blobitecture movement  or trend, or tendency - simultaneously organic and technological. Beetham Tower is similarly fine, all shimmering glass and bold simple modern lines. And as those passing on the motorway will know, the iconic Fort Dunlop has been revitalised without losing anything of its power.

Britain has a plethora of German Markets every December, but Birminghams Frankfurt Christmas Market, established 10 years ago, is the biggest in the country  indeed the biggest outside Germany and Austria. This year there are nearly 200 stalls if its adjoining craft fair is added: gulp a Glühwein or a beer, bag a Bratwurst, peck a Pretzel, and wander by more than 1000 yards of places to find presents and Yuletide treats, stretching from the Bullring to Centenary Square, the German colony focussed on Victoria Square. The craft fair brings a local aspect to the temporary retail festivities. Even if you dont put your hand in your pocket you can breathe in the atmosphere, literally and metaphorically  outdoor food smells so good!

In changing Brum has not thrown away some of the best and most stylish aspects of the old, including its Victorian arcades: the Piccadilly, Great Western and Burlington. Small outlets, many independents, a rather elegant way of shopping that harks back to more genteel times, with the benefit in the Christmas rush of a touch of civilised behaviour among shoppers. While filling your bags dont forget to stop and look around at the stylish and effective decor.

If independent shopping and real craft skill is your (shopping) bag then whatever else you do in Brummagem you must not miss the Jewellery Quarter. Unlike some historic zones it has retained its raison detre, with loads of artisan jewellers  buy direct and save a few bob  with a huge range of styles. No shortage of places to eat in the area either, including some of the curries that the city is renowned for.

Man doesnt live by shopping alone. During your break in the city why not take in some of the entertainments and other events running this December? Not at all seasonal, but something that many will be very keen to see is the display at Birmingham Museum of parts of the Staffordshire Hoard  compare todays craftsmanship seen in the Jewellery Quarter with that of our Saxon ancestors  they certainly knew how to work gold. That museum could be a godsend for families with conflicting requirements: along with the gold theres a display of Chinese prints, and one of urban music artefacts including a full reggae sound-system. Pick the right day and theres Santas Grotto at the same venue too.

As a major city Birmingham has lots of music on offer: Symphony Hall has  inevitably  Handels Messiah (on Friday 9); and on several nights has Sue Perkins as part of the CBSOs Great Big Choral Christmas, with rather more restrained concerts between them.

For a different kind of event see a historic house brought to dramatic life: the Jacobean splendour of Ashton Hall seen by candlelight, rather anachronistically presenting a Victorian Christmas (2  11 December); and the only slightly less grand Soho House where the traditions of Christmas past are explored on 1 and 15 December.

Along with all those festive events the working heart of the city continues beating all December: there are some very high-end restaurants, the Balti triangle, and a host of mid-range eateries to keep visiting families fed  provided they havent stuffed themselves with Crimble goodies at the Frankfurt Market. If you are staying for a night or two Information Britain has a huge variety of accommodation options in and around the city.