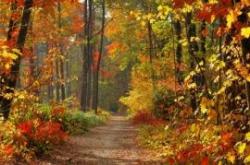 Autumn in the Southern Chilterns

We feel an autumn break should be about embracing the beauty of the season rather than trying to escape it in the search for year-round summer. Enjoying the scents of a woodland stroll on chalky slopes; the sight of glorious golds and reds in the trees; our breath misting in the chilly morning air: that and plenty more is yours to discover in October in the Southern Chilterns.

The Southern Chilterns begin at Goring and Pangbourne on the Thames, and strike north-eastwards to Berkhamstead, Chesham and Amersham, a somewhat arbitrary but serviceable division with the northern sector.

So where to head for that autumnal walk? Pretty much bang in the middle is Warburg Nature Reserve, between the villages of Nettlebed and Pishill, both by the way with accommodation listed by Information Britain, but then we have good coverage across the district. With its mix of woodland and chalk grassland this gives a wonderful and colourful snapshot of the Chilterns. In the autumn it is claimed there are 400 or more varieties of fungi to spot here, a good basis for a game with the kids. Found one!

Alternatively, at the north-west tip of the area there are the Wendover Woods, with lots of the beeches for which the Chilterns are famous (and whose old name of Buccan is thought by some to be the origin of Buckinghamshires name) and which in places still provide the raw material for the chair-making that was once a major source of employment here. No shortage of oak and ash either. There are plenty of marked trails and some great viewpoints here.

If it is viewpoints you are after, however, then the best bet may be Chinnor Hill Nature Reserve, with beeches aplenty again, and chalk downland along with the woods. At the top, as well as looking across the countryside opening out before you, look up and around for the Red Kites that have been reintroduced to the area with some success. Not very far away from this walk by the way is the preserved Chinnor and Princes Risborough Railway, maybe a bargaining chip for reluctant youthful walkers.

Last of the walks  though there are innumerable others to be searched out in your travels down the byways here  is the Chilterns Sculpture Trail between Stokenchurch and Watlington, within easy reach of junctions 5 and 6 of the M40. Again in a woodland setting, but a change of style with 20 or so artworks to enhance and blend with the environment.

All that walking deserves some recompense, especially for the adults arranging it. At Terrick between Wendover and Askett there is the Chilterns Brewery, complete with shop for stocking up on evening supplies. Please wine and beer lovers alike with a visit to Chiltern Valley Winery and Brewery near Hambledon. Or at the top of the area we are covering here, theres Tring Brewery, again with its own shop.

The area has a wealth of stately homes, points of interest and historic sites to visit too, a glance at the map will reveal somewhere near wherever you choose to stay. How about Chenies Manor House just east of Chesham? The house predates the Tudor dynasty, but wasnt snobbish about it and hosted both Henry VIII and Elizabeth I. Or a couple for the younger family members: the Roald Dahl Museum and Story Centre in Great Missendens High Street; and Bekonscot Model Railway and Village near Beaconsfield. A bit of culture and a quick view of local history is on offer at Amersham Museum in a fine Tudor building.

You may of course prefer to keep away from towns and what pass for crowds here. Once you are away from the main routes in the Southern Chilterns there are lots of small villages like the lovely Exlade Street near Woodcote, or Radnage to the north of Stokenchurch, where the church has wall-paintings dating back to the 16th century. Follow your nose, find a little pub for lunch, and walk that off with a stroll through the village or meander down a lane. Find conkers and if you are daring even risk a game. Simple pleasures that leave lasting memories.

Information Britain lists many places throughout the area: among them some decidedly posh country house hotels with fine facilities; cosy inns where now happily the only smoke youre likely to see inside will be from logs; B&Bs where youll get the benefit of local knowledge to guide you to pretty corners; and cottages for a home-from-home. Enjoy your browsing.