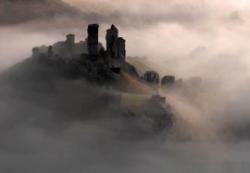 Why the Isle of Purbeck? Visitors to these shores, and we Britons likewise, far too often limit our trip horizons to the big stuff: cities like London, Edinburgh and Oxford; maybe the Cotswolds. But this misses so much of the true flavour of Britain  deckchairs and boat trips, fish and chips, ruined castles, heath and hills, old railways and startling coastlines. Visit Purbeck in July and youll find all those and more.

There is a problem with the Isle of Purbeck: how to define it. Every local, every expert, has a different version. So heres our relaxedly inexpert offering: it is the south-eastern bit of Dorset bounded by the Channel to the east and south, striking north beyond Tyneham and then along the River Frome north east to Poole harbour. And it is not an island, but a rather bulbous peninsula.

For a refined knotted-hankie (possibly silk), digging-up, fish and chips and boat-trips-on-the-briny experience, Swanage is the place. There is a Victorian pier, a pleasant beach of white sands, deck chairs to sleep in and pedalos for the adventurous. Move inland and you find the older part of the town around the Mill Pond; a church with a 13th century tower; and the Town Hall which borrowed its Christopher Wren-designed facade from London in 1883  fair exchange as much of London was rebuilt following the 1666 Great Fire using Purbeck Marble. Swanage has a plethora of places to stay: Purbeck House Hotel whose elegant frontage is matched by its views to the sea; the late-Victorian splendour of The Grand; equally grand B&Bs like The Castleton; or for something traditional the White Swan, an old inn with top-notch restaurant; or right in the centre, the Town Hall Lodge B&B.

For a fine trip out of the town leave the car and take the steam railway to Corfe Castle, the Norman fortress slighted during the Civil War. The National Trust takes rather better care of it now, and the museum is a must-see. But Corfe is a place to stop, not just visit, and it has some intriguing accommodation options: a boutique hotel set in a working vineyard (The Purbeck Vineyard); a 16th century manor house now a luxury hotel - Mortons House); or a picturesque Dorset cottage on a farm  The Cheese House. A mile or two south of Corfe youll find Kingston, where a similarly characterful place, Kingston Country Courtyard, has a variety of apartments, suites, and farmhouse options for your stay.

Swanage is of course not the only seaside resort on the Island of Purbeck. Studland on its eponymous bay is far smaller, but full of character, and with the bird sanctuary on the bays northern horn and Old Harry Rocks on the southern it will appeal to those with something more outdoorsy than eating ice-cream in mind. The Manor House Hotel on the bay offers country house refinement and unbeatable views; or how about an authentic and inspiring Tudor building  The Bankes Arms in the village, conveniently equipped with its own brewery, which is thoughtful.

When you are in Dorset, make the effort to track down some of the local specialities: the Dorset Knob (no, a sort of rusky biscuit); Blue Vinney Cheese; and Thomas Hardys Ale  sweet, strong and not for the designated driver. And dont miss out on some of the quirkier geographic treats: the chain ferry over to Sandbanks where the multi-millionaires live; walk on Wych or Grange Heaths in July and look out for Dorset Heather and Bog Asphodel; stroll the Purbeck Hills; make for Kimmeridge which Dallas-be-damned claims the oldest working oil-well in the world; or stick near Swanage and visit massive Durlston Country Park above the town, perfect for picnics and strolling at ease. Above all, and keeping an eye out for fossils, explore the Jurassic coast that forms the southern edge of Purbeck, a world heritage site and no wonder.