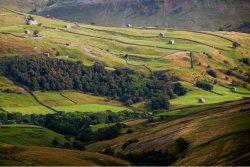 Askrigg
Did you know that Askrigg acted as "Darrowby" in the 1970s BBC TV series " All Creatures Great and Small ", based on the adventures of author James Herriot (pseudonym of the rather less euphoniously monikered Alf Wight)? The Wensleydale village, whose Norse-derived name means ridge with ash trees is still visited by many fans seeking The Drovers Arms (actually the Kings Arms ) and other Herriot-country landmarks.
Northallerton
Did you know that the first fixed-wing flight in aviation history took place in Brompton, North Yorkshire? The inventor Sir George Cayley designed and built gliders with lift-generating wing-profiles  and had the sense to get his servants to fly them. The first flight made in one of his aircraft was in 1849, the biplane manned by a 10-year-old boy sadly anonymous; likewise the flight across Brompton Dale in his monoplane in 1853, thought to have been piloted by his coachman or butler.
Richmond
Did you know that Richmond Castle walls are the oldest castle walls in Britain outside London ? They were begun in 1071, just after William the Conqueror had devastated the region during his Harrying of the North punishing an uprising there, and were intended to prevent further rebellions. Alan the Red/Rufus/Le Roux who was given the area by his uncle William, and who built the fortress at Richmond, is thought to have been the richest man in British history, owning 250,000 acres of land, his fortune equivalent to more than £80 billion.
Ripon
Did you know that Ripon was the first chartered city in Britain with a charter granted back in 886? Its cathedral dates back further still, elements of it built in 672. The charter of 886 was supposedly granted by Alfred the Great , who also bestowed a warning horn on the settlement: a wakeman still blows a horn at each corner of the market square every night, signaling vigilance against enemies, the tradition unbroken for a millennium and more.
Scarborough
Did you know that the oldest house so far found in the British Isles was unearthed at the Star Carr site near Scarborough? It has been dated to approximately 8500BC. The 11 foot wide structure used 18 wooden poles arranged in a circle as its framework. Archaeologists there also found the oldest evidence of carpentry discovered in Europe, in the form of a platform thought to have been a simple quay.
Did you know that the South Cliff Lift in Scarborough was the first to be opened in the UK? It began its working life in 1875, and is still in operation. The original cost was £8000, not a bad investment for something still carrying passengers nearly a century and a half on.
York
Did you know that a law still apparently on the statue books that makes it legal to shoot a Scotsman in York? But only with a bow and arrow and definitely not on Sundays. We strongly recommend not testing this out, as little matters like the law of murder would over-ride any such archaic remnants; and some of our best friends are Scottish. Though it is tempting to list a few others... no, best not.
Did you know that Lancelot Blackburne, Archbishop of York from 1724 to 1743, served as a pirate in the Caribbean in his younger days  though he was already ordained by then? His clerical career progressed on his return to England, but not it seems his morality: he was once ejected from a church for asking for his pipe and beer; and his wife objected to his mistress moving in with them.