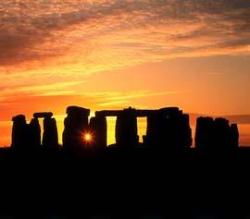 Bradford on Avon
Did you know that one of the most complete and unaltered Saxon buildings in Britain is to be found at Bradford-on-Avon? St Laurences Church for some reason was left by the Normans , who built their own place of worship nearby. Development around it hid the building from view for centuries, and it was used as a school, residence and workshop until rediscovered in the 19th century. Built in the 8th century it was renovated in the 10th or 11th, still in Saxon times.
Calne
Did you know that Joseph Priestley discovered oxygen on August 1 1774 at Bowood House near Calne? He worked there as librarian to the Earl of Shelbourne and tutor to his sons, and was provided with a room off the library as a laboratory. He separated oxygen from mercury oxide, using the suns rays focused through a magnifying glass to heat the substance and produce what he named dephlogisticated air, which made a candle burn more brightly than in ordinary air.
Castle Combe
Did you know that most of the village scenes in the 1968 Doctor Doolittle film were shot in Castle Combe? Contrary to the usual tales of everyone loving the experience, villagers were greatly annoyed by some of the actions of the film crew. The most obvious example of this concerned an ugly dam built for the movie: Ranulph Fiennes, at the time in the SAS, tried to blow it up, for which he was later fined £500.
Devizes
Did you know the longest flight of locks on Britains waterways is to be found near Devizes? The 29-lock stretch on two miles of the Kennet and Avon Canal climbs 230 foot high Caen Hill, and was understandably the last part of that project to be completed. It takes an experienced user a good five hours to pass through the system designed by the great canal engineer John Rennie.
Lacock
Did you know that the worlds oldest surviving photograph was taken at Lacock Abbey by William Fox Talbot in 1835? It is of the Oriel Window in the library, and though simple it is rather beautiful. William Talbot owned the house, which now has a museum dedicated to his work  though that first negative is held at the National Media Museum in Bradford.
Did you know that Lacock Abbey was a major location for the first two Harry Potter films? It provided the cloisters and various other Hogwarts interiors.
Malmesbury
Did you know that Eilmer, probably our first aviator, made his maiden flight from the Abbey tower in Malmsbury in the 11th century? He supposedly glided more than 200m before losing control and breaking his legs. Eilmer once recovered wanted to go again, with some design changes, but sadly his abbot stopped him.
Marlborough
Did you know that the oldest working beam-engine in the world is to be found at Crofton, near Marlborough? The 42-inch bore Boulton and Watt machine was built in 1812, fitted at Crofton Pumping Station to provide water to the higher reaches of the Kennet and Avon Canal. It is still steamed on occasion for the benefit of visitors to the site.
Salisbury
Did you know that at 404 feet the spire at Salisbury Cathedral is the tallest spire in Britain and its tallest masonry structure? It was at one time the tallest spire in all Europe. The spire was built in 1320, a century after the foundation stone of the main building was laid
Did you know that inside Salisbury Cathedral is the oldest working clock in Britain which dates back to 1386? It is almost certainly also the oldest working mechanical device of any complexity in the world. Incredibly the clock, which has neither hands nor dial but merely marks the passage of time by the striking of bells, was dismantled and set aside in 1884, replaced by a new mechanism. Happily it was rescued in 1929 and restored in 1956. Salisbury Cathedrals Chapter House also boasts what is regarded as the best extant copy of Magna Carta .
Did you know that William Golding was a teacher at Bishop Wordsworths School in Salisbury when he wrote Lord of the Flies? His career there began in 1940 and ended in 1962. He not only proved a very accurate observer of adolescent male group behaviour, but also disproved if it were necessary that odious cliché that those who cant, teach.
Swindon
Did you know that Swindon has several James Bond links? Ian Fleming bought and demolished Warneford Place, a house in Sevenhampton to the north of Swindon, and built a new one  Sevenhampton Place - in its stead, moving in a year before his death in 1964. The novelist is buried in the churchyard of St Jamess Church there. And two Bond movies - A View to a Kill and The World is not Enough - had scenes shot at industrial sites in the town.