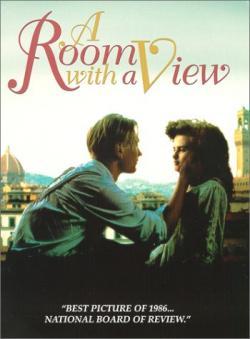 A Room With A View

You either love Merchant Ivory films or you hate them.. This writer would rather watch repeated weather forecasts. What director James Ivory, writer Ruth Prawer Jhabvala, and producer Ismail Merchant did was carefully crafted, highly skilful, and undoubtedly clever, but it was often joyless too. Using novels by the cloying and self-satisfied E.M. Forster as with A Room with a View isnt likely to reduce that joylessness.
The partnership did attract top quality actors to their productions: in this case those actors include Denholm Elliot, Maggie Smith , Simon Callow , Judi Dench , Daniel Day-Lewis , Helena Bonham-Carter ... a cast-list any director would envy, but which is subordinate to the Merchant Ivory look: pristine costumes; beautiful settings; handsome actors; sumptuous photography; superb lighting. At times you start to feel the actors are used almost ornamentally rather than to create a drama. If Simon Callow doesnt shine in a film then something is wrong with it.
Like a meal made entirely of puddings A Room with a View is just too much, the Puccini arias thrown in for good measure adding more cream. Millions disagree; Merchant Ivory films regularly coined it in at the cinema and were showered with awards. One mans meat etc.