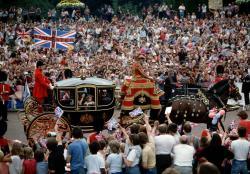 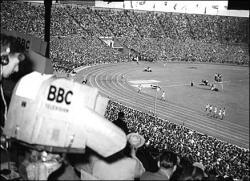 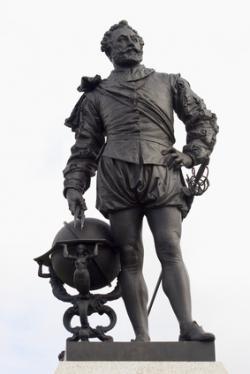 Wedding of Charles and Diana

Words are cheap, and clichés cheaper, which is just as well given the number of times the phrase fairytale wedding was used about the St Pauls Cathedral wedding of Prince Charles and Diana Spencer.
There were indeed many fairytale aspects to the ceremony, including an unfeasibly large number of crowned heads, princelings and royalty in exile among the 3500 guests at the ceremony, though public interest was more in friends like Spike Milligan being there, and novelist Barbara Cartland (Dianas step-grandmother) being absent. Diana arrived at the church in the glass coach straight out of Cinderella, though given the lack of room  her huge lace train making things very uncomfortable for the future Princess and her father  another vehicle may have been more appropriate, or at least practical. And that dress was like something from a Disney cartoon, though many of the men watching it emerge into public view for the first time will have wondered if someone forgot to iron it. This was the Eighties, the decade that taste forgot, and Dianas dress was the epitome of the meringue style  complete with puff sleeves - ridiculed later in Four Weddings and a Funeral . It was amazing that she still looked incredibly beautiful in it, the eye drawn to her face rather than the 25 train.
It was estimated that more than half a million turned up in London to line the route of the royal processions  one reason St Pauls rather than the more usual Westminster Abbey had been selected was to allow a longer route  and that perhaps 750 million watched the days events on television, the largest audience for such an event in history, though now thoroughly eclipsed by the wedding of Prince William and Kate Middleton as was, believed to have been around two billion.
What do we all remember from the day? She got his names in a tangle, but then he does have rather a lot; he offered her thy goods; there was no vow of bridal obedience; and afterwards the kiss, somewhat contrary to royal protocol, on Buckingham Palace s balcony.
The script went well for a time, Prince William born within a year, Harry two years after that. But as became all too public, the happiness did not last. Charles it appears married from duty, Diana from love, awestruck too doubtless at the prospect of being a royal bride and one day Queen. The last part was not to be. They separated, and in 1996 divorced, both having committed and confessed infidelities. When in 1997 Diana died in a Paris car crash it was far from a fairytale ending.