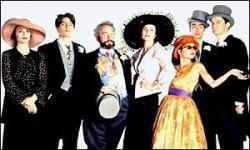 Four Weddings and a Funeral

Four Weddings and a Funeral is one of the great (very) British comedies , and also something of a mystery  i.e. why Hugh Grant s Charles should fall for Andie MacDowells character instead of Kristin Scott-Thomas s. But MacDowells annoying performance is buried beneath wonderful character acting by James Fleet, David Haig, Corin Redgrave, Rupert Vansittart et al. A 10 second cameo from Kenneth Griffith is another lollipop for those who appreciate acting craft. Writer Richard Curtis went on to more complex plots  the brilliant Love Actually and Notting Hill  but he provides an endearing tale of loves troubled ways, turned into a visual feast by director Mike Newell who gets the maximum from the set-piece opportunities provided by churches and classy receptions. The film made Hugh Grant a star, giving him ample scope for his natural charm and under-rated comic timing; and boosted the careers of Simon Callow as human whirlwind Gareth and John Hannah as Gareths lover Matthew  it is hard now to read Auden s Funeral Blues without Hannahs voice taking over. At a time when British film was flagging FWAAF showed what talent was available here, and that all the studio trickery in the world cannot compete with British locations in providing gravitas, atmosphere, style and substance to a movie. Take a bow Luton Hoo , Hampstead , and even West Thurrock .

Visit the Film Set - Four Weddings and a Funeral