"The best value for all day parking in Liverpool i...more 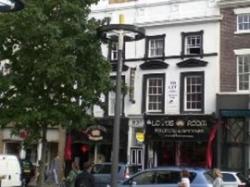 If you're after a quiet space for the more arty/lefty/cultured traveller in Liverpool, Moolin Rouge Apartment is a one bedroomed second floor apartment which sleeps up to four people right in the cultural heart of Liverpool City Centre's Bold Street. The apartment is right opposite Liverpool's arthouse cinema complex FACT and radical bookshop News From Nowhere, and within several hundred yards walking distance of various bars, cafés and art galleries. The apartment consists of one large and very quiet double glazed bedroom with a king sized bed, a bathroom with bath and shower, a living room with a double sofa-bed and a fully fitted kitchen. Features Include:
Large bright bedroom with king sized bed and outlook on Roman Catholic Cathedral (or the top of it at least)......... Fully equipped kitchen including microwave, fridge, oven and hob......... Full laundry facilities including washer dryer and iron......... Digital television including on demand Pay TV channels, Film Four and all Freeview channels......... DVD player (multi-region) and stereo system with fairly arty/left-wing DVD library (er, and "Murder She Wrote" boxsets)......... Digital radio including all local and national DAB stations......... Playstation 2 games console with Singstar microphones and various family games......... 2 goldfish to stare at, although they dont do very much......... Nice pictures of cows hanging on the walls, hence the tenuously linked name