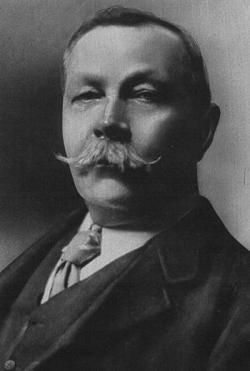 Born in Edinburgh, Edinburgh and the Lothians
Born on 22nd of May 1859
Died in Crowborough, Sussex
Died on 7th of July 1930

In Sherlock Holmes Sir Arthur Conan Doyle came up with the greatest fictional detective in history and practically invented the genre of the detective story.

Arthur Conan Doyle was born on May 22, 1859 in Edinburgh. He attended the great Catholic public school Stoneyhurst College in Lancashire and in 1876 entered Edinburgh University to study medicine. In his spare time he began to write stories which were published anonymously in various magazines between 1878 and 1880; meanwhile he worked as a GP. He married Louise Hawkins in 1885.

It wasnt until 1887 that Conan Doyle could give up medicine and make a living from his writing. This was due to the success of A Study in Scarlett, the first Sherlock Holmes story. Over the next 40 years Conan Doyle was to write four more full length novels and 56 short stories featuring the pipe smoking master of disguise and deduction and his faithful companion and chronicler Dr Watson. He wove his own experiences as a doctor into the character of Watson and partly based Holmess deductive method on that of his mentor at University, Joseph Bell. Sherlock Holmes became so popular that when Doyle killed him off in 1893, dying at the hands of his arch enemy Moriarty, there was a national outcry and Doyle had to resurrect the great detective in 1903.

Conan Doyle wrote many other novels including the Professor Challenger stories and historical novels. During the Boer War he served as a chief surgeon and received a knighthood for this in 1902. Returning home he twice stood unsuccessfully for Parliament and in 1907 following the death of Louise Conan Doyle from tuberculosis, married his second wife Jean Leckie. He campaigned for many worthy causes and found time to write a six volume account of the British campaign of WWI. In 1915 Doyle became interested in spiritualism and devoted much of the rest of his life to propagating his beliefs. He died of a heart attack on July 7, 1930 at his home in Crowborough Sussex.
Buried here

Contributors: Do you have a site related to Arthur Conan Doyle?
Supply some content for this page and we will gladly add a link to your site. Email here.