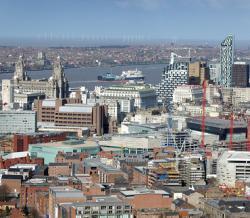 The best value for all day parking in Liverpool is at the King Dock where you can park all day for £3.50 but only after 9.30am. Great for visiting the docks, Liver Building, pierhead etc but a reasonable walk into the city centre. Even so, it is easy to find, just follow the main docks road and follow the signs for Albert Dock. Past that there is a sign for the King Dock. - Denise

King John granted a Royal Charter to Liverpool in 1207, creating a city now known world-wide as the birthplace of The Beatles and the home of Liverpool and Everton Football Clubs (the latter being the older of the two).
Liverpool was once the "Second City of Empire", eclipsing even London for commerce at times. The miles of docks bore witness to cargoes from around the globe and the mass migration of peoples from all over Europe to the New World.
Today, Liverpool is set to become one of the first World Wide Web cities, with links to the Internet on every street corner around the city centre. The city is planning to establish free computer terminals in public places such as streets, libraries, banks and car parks.
In the United Kingdom, Liverpool has a reputation second to none as a unique place to visit and enjoy - Dazza