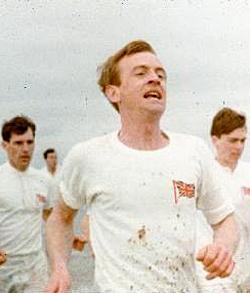 Chariots of Fire is that rare cinematic animal, a sporting film that works. Except that the sport is more a vehicle for the deeper elements of the script by Colin Welland : the power of personal conviction; the fight against prejudice; and the hypocrisy of the British establishment elegantly personified by John Gielgud as Master of Trinity. The sporting aspect is, however, exciting enough in its own right, the tale of Harold Abrahams and his determination to win Olympic gold, and of Eric Liddell s success in the 400m. The film takes liberties with facts, but its a drama after all, not a documentary. Played out with the stirring Vangelis score in the background the story develops slowly  literally so in its celebrated use of slow-motion - very much an ensemble piece with the major parts played by then unknowns Ben Cross and Ian Charleson , though the supporting cast  Gielgud, Lindsay Anderson, Ian Holm among them  is very powerful. Chariots was nominated for seven Oscars, winning four  screenplay, producer, score, and tellingly costume design (the great Milena Canonero), the latter a recognition of the look that the film achieved both in its settings  the beach at St Andrews , Eton , the National Railway Museum in York et al  and its more detailed design.