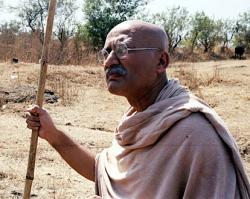 One of the great biopics, the 1982 movie Gandhi is necessarily a sweeping work, covering nearly a half-century of its subjects life and weaving his personal story through the history of India in which he played such an important role. Ben Kingsley gives the performance that made his career, moving and dignified as the great advocate of non-violent protest, rightly winning an Oscar. The film indeed garnered eight Academy Awards, including Best Director for Richard Attenborough and Best Picture  Gandhi is the perfect Oscar film, an issue-driven compassionate costume drama, the presence of American stars Martin Sheen and Candice Bergen ensuring it would not lose out as just a Brit thing. For star-spotters Gandhi is three hours of endless pleasure: Johns Gielgud and Mills ; Trevor Howard ; Saeed Jaffrey; Nigel Hawthorne ; Michael Hordern ; and Edward Fox giving his stiff-upper-lip-repressed-Englishman best as the vile Reginald Dyer, architect of the 1919 Amritsar Massacre, dealt with at length in the movie. There is no doubting the films greatness in terms of cinematic quality. Visually it is stunning especially in set-pieces like the funeral. As a paen to its central character it does, however, succumb to the temptation to show the Brits as almost uniformly stereotypical bastards through all of its 188 minutes. It swaps some subtlety for relentlessness, understandable given the power of its messages of equality, freedom and justice  rendered all the more contemporary via Gandhis early South African experience reminding viewers of the apartheid system that still applied there in 1982.