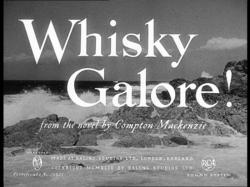 In little more than 80 minutes of classic cinema Scottish-American director Alexander Mackendrick builds a story that is funny, charming, involving, and at times like the caching of the whisky with real tension albeit leavened by absurdity. The adverts today last longer. The novel by Compton Mackenzie (who also appears in a minor role) translates effortlessly to the big screen: the wild sea; the beauty of the island of Barra ; and Mackendricks eye for location combine to splendid visual effect. But it is the simple story of love  for fiancée, whisky, and home  and of beating the powers that be  whether the distant government or the domineering mother (Jean Cadell, grandmother of Simon)  that remains in the memory. This is one of the greatest of the Ealing comedies, with a suitably starry cast: a young Gordon Jackson ; James Robertson-Justice at home as a doctor; John Gregson; Joan Greenwood the love interest; and the wonderful Basil Radford as the pompous officer. At a time when Britain still struggled with rationing it was an instant hit; and its still as entertaining at when released in 1949.