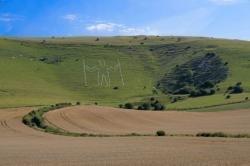 Situated in South East of England, the South Downs is one of two areas of chalk downland that run parallel and which would have once formed part of the same outcrop. Erosion has since removed the chalk between the two ridges so that they are now separate, with the area lying between the North Downs and South Downs called The Weald .

The South Downs are comprised of two Areas of Outstanding Natural Beauty - AONBs  East Hampshire and the Sussex Downs, extending for about 70 miles through East and West Sussex and part of Hampshire . Townships within the area include Eastbourne , Brighton , Hove , Portslade, Shoreham-by-Sea , Arundel and Midhurst as well as the headland of Beachy Head .

The name Downs comes from an Old English term dun meaning hill. Butser Hill is the highest point at 886ft and as such, qualifies as one of Englands Marilyns . The Seven Sisters are the most famous South Downs cliffs, after Beachy Head, situated between Eastbourne and Seaford .

The South Downs Way National Trail is open to walkers, cyclists, horse riders, and adventurous disabled people using a suitable cross country buggy. It runs for about 100 miles between Winchester and Eastbourne following prehistoric droveways that have been in use for at least 6,000 years. Numerous Bronze Age round barrows decorate the trail together with Iron Age hill forts such as Devil's Dyke and Old Winchester Hill.

Several wildlife sites can be found along the trail. Chalk grasslands are full of wild flowers in spring and summer, which in turn, attract plenty of butterflies. Several species of wild orchid can be found on the Downs. Survival of the grasslands depends on grazing however, so sheep and cattle can also be found in abundance as can small villages and country pubs . The South Downs Way connects with the North Downs Way at Shoreham-by-Sea