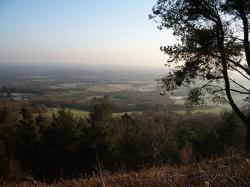 The North Downs are a ridge of chalk hills that stretch for 120 miles across south east England. The North Downs run from Farnham in Surrey all the way to the iconic White Cliffs of Dover in Kent. The narrow spine that is known as the Hog's Back between Farnham and Guildford makes up the western end of the North Downs. The cliffs that run between Folkestone and Deal mark the end of the ridge in the east. The North Downs lie within Two Areas of Outstanding Natural Beauty, the Surrey Hills and the Kent Downs. There are many Sites of Special Scientific Interest in the North Downs.

The profile of the hills that make up the downs are very distinct, having been formed originally with the help of the Ice Age. The southern slope is a steep escarpment whereas the northern side is a gentle slope.

The highest parts of the Downs lie near the Kent-Surrey border where they reach heights in excess of 200 metres above sea level at the crest of the escarpment. The highest point in London , Westerham Heights, is on the North Downs. To the East of the Medway Valley the Downs become much broader and flatter on their way to the Isle of Thanet.

The North Downs boasts a host of beauty spots. Many of them are owned by the National Trust, such as Box Hill and Langdon Cliffs. Other areas of leisure and interest include Newland's Corner, Wye Downs and the Hog's Back. Much of the surviving chalk grassland and ancient woodland on the downs is open for public access. There are also many historic sites on the downs such as Kit's Coty House near Maidstone and of course the magnificent Dover Castle .

Cycling is a popular pastimes and the Downs offer mountain biking fans some great riding. The North Downs have long attracted walkers and ramblers attracted to the rare juxtaposition of the busy urban areas of the south-east and the tranquility of countryside. The North Downs Way National Trail runs along the North Downs from Farnham to Dover .