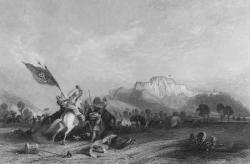 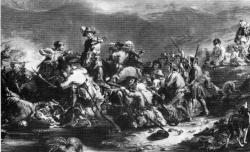 The Battle Of Sauchieburn was the last stand of a shambolic monarch as rebellion brought King James IIIs rule crashing to a fatal conclusion.
James III lacked the political nous to be king. A mind turned by constant plotting and a distrust of those around him, he lived in a prism of doubt, jealousy and ambition.
In some respects, James III was a hostage to fortune; he belonged to that most cursed dynasty, the Stewart Kings  an exploding cannon at Roxburgh saw off his father, King James II. But his end would be no accident. Crowned at the age of nine, his mother, Mary of Gueldres, was made regent and  with the close council of Bishop Kennedy  ran the countrys affairs until he was old enough to rule. In the absence of supreme ruler dissent would spread, vacuum of authority would indulge the political opportunist.
In the years following Bishop Kennedys death, James III became a pawn. He was captured and forced to declare before parliament that Sir Alexander Boyd was acting in his interest. Boyd would only be serving his own dynastic ambition. He arranged for his son, Thomas, to marry the kings sister, and though Boyds brazen chicanery afforded him some regal clout it was short-lived. His ascent courted enemies that would ultimately annul his swelling influence. When Boyd left for Denmark, to arrange the marriage between Princess Margaret Of Denmark and James III, his rivals seized the opportunity, turning the king against Boyd.
James III would learn that governing the country to his every caprice resulted in chaotic governance. Relationships with his barons became fractious  their influence on the countrys affairs diminished under a king, who would act unilaterally, pandering to his favoured courtiers.

In 1482, his brother Alexander, Duke of Albany, would rebel, taking arms in his campaign for the throne. Supported by troops sent by King Edward IV , Albanys rebellion fell short at Edinburgh Castle . James IIIs barons  supposedly loyal to him  did not offer a stout resistance, yet still they found favour in the kings court. Frustrated again by the kings whimsical rule, the nobles were driven to open rebellion, rallying their political and military efforts behind Prince James, the kings fifteen-year-old son.
The unrest would come to a head at Sauchie Burn, a short distance from Bannockburn . James III would meet the rebels in battle, and he would perish. But to this day his death would be shrouded in mystery. Some say he died falling from his horse, others that he survived the fall, and was given aid by a miller and his wife, asking to see a priest, a nobleman disguised as a priest would visit him and stab the king. A kings death in battle, or the aftermath, would always enter folklore. As it stood, James IIIs death was declared accidental.
He would be succeed by his son, King James IV . The new king would wear an iron chain round his waist in penance, a mark of his guilt in his involvement in his fathers death.