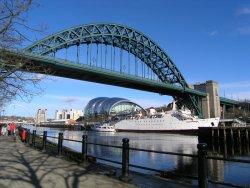 Gateshead
Did you know that Daniel Defoe may have begun "Robinson Crusoe" in Gateshead? He lived in Hillgate it is thought between 1706 and 1710, and Alexander Selkirk the model for his famous castaway was rescued in 1709 .
Did you know that a house in Gateshead became the first home in the world to be lit by an electric light bulb? Joseph Wilson Swan , a chemist and inventor who lived in Gateshead, demonstrated his new device in his house in that town in 1878, receiving a patent for the incandescent bulb that same year  beating Edison by a year.
Newcastle upon Tyne
Did you know Stephenson s Rocket, which won the Rainhill Trials in 1829, was built in Newcastle? Its design set the standard for steam locomotives for a century and more.
Did you know the first public demonstration of the light-bulb was given by its inventor Joseph Swan on 3rd Feb 1879 at a lecture theatre in Newcastle, therefore the first public building in the world lit by electric light? In 1881 Mosley Street in Newcastle became the first street in the world to be illuminated by electric light.
Did you know the worlds first organised dog show was held in Newcastle on June 28 1859? It was only for Pointers and Setters, and was the brainchild of a Mr Shorthose and Mr Pape. Some 60 dogs were entered.
Did you know that Geordies are so called because the city was the only one in the North East that supported George II and closed its gates to the Jacobite army during the rebellion of 1745?
Sunderland
Did you know that St Peters Church , built circa 674 in Monkwearmouth, was the first ever church in Britain to have stained glass windows? Its founder Benedict Biscop travelled, remarkably for the age, five times to Rome, and attracted craftsmen to his twin religious houses in Jarrow and Monkwearmouth. These included glaziers from Gaul (France), some of whose output has been unearthed by archeologists around the still used church.