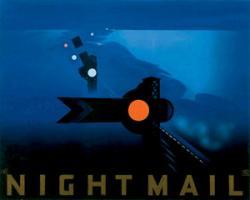 Great cinematic art does not just mean fiction. Before WWII a powerful documentary movement sprang up in British cinema, of which the 1936 production Night Mail is the most celebrated product.
Seeing a film was made by The GPO Film Unit could lead you to expect some soulless training stock, or worse still something jolly used for promotional purposes. But Night Mail was always going to be a creative piece, albeit with the aim of showing the public and postal workers how the postal system connected the nation, though that goal is taken further, and made so much more of. It is to the eternal credit of John Grierson , head of the GPO Film Unit, and one of the hugely talented team behind Night Mail (and one of its narrators), that rather than show everything heading to London , he insisted on the train journey being from the capital northwards to Scotland. It was Grierson, incidentally, who came up with the very term documentary.
Elements of the film are pretty straight documentary, showing the sorting of post on the train for example; but it is for the sequence where W.H. Auden s specially written poem Night Mail partners music by Benjamin Britten and images of racing train-wheels that the piece is remembered and loved. Much adapted to fit the pictures the poem is drivingly rhythmic and rhyming as spoken in cut-glass accent by Pat Jackson (as someone wrote recently of the piece, who says white men cant rap?). A piece anyone studying film should know and ideally possess.