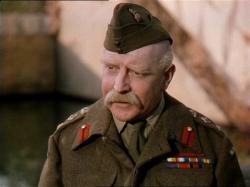 The Life and Death of Colonel Blimp

One of the most English of English films Colonel Blimp was as co-director and producer Michael Powell pointed out made by a truly international collection of artists: Emeric Pressburger who was the main writer was Hungarian in origin; Anton Walbrook, the sympathetic German officer Theo was Austrian; Deborah Kerr playing three roles a Scot; the superb Roger Livesey was a Welshman; and so on to the Czech costume designer and German composer of the score.
Through the character of Clive Candy, winner of the VC in the Boer War , Powell and Pressburger explore honour, love, patriotism and duty, with the Nazi threat looming large as established at the opening of the film which then goes into flashback. At the end we wonder if beating the Nazis by their methods would in fact be a victory; at the least it would be to sacrifice something special, i.e. that indefinable quality Britishness (perhaps more specifically Englishness). Churchill tried to block the films production (possibly through vanity, Candy shares some traits and history with the wartime PM; more likely because of its ambivalence towards total war). The movie also examines what it is like to grow old, again perhaps British decline seen through the symbolic Blimp.
Moving, romantic, heroic and comic the 1943-released film is also a technical triumph of the (here French) cinematographers art, the colour dazzling; and for Kerr who must portray three different women while also showing their similarities and Livesey who takes Candy from youth to old age it was an actors dream.