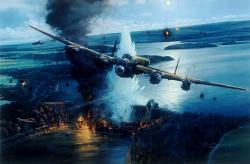 The Dam Busters, released in 1955, is a brilliantly put together British-themed film made with a cast and crew skilled in the craft. The lead actors Richard Todd (nobody did stiff upper lip parts more sexily) and Michael Redgrave (who played sensitive, sensible and honourable better?) obviously relish their roles. The script was by R.C. Sherriff of Journeys End fame, also responsible for Goodbye Mr Chips and The Four Feathers. Michael Anderson directed solidly, as he would later The Shoes of the Fisherman and Logans Run, ensuring the story is told. And The Dam Busters March beloved of England football crowds to this day was contributed by Eric Coates , equally well remembered for the music introducing Desert Island Disks. Telling the story of the dangerous mission to bomb dams in the Ruhr Valley during WWII , the film manages to go much further, exploring determination and courage on the part of the inventor Barnes Wallis and the pilots who carried out the raid. The daring of the raid is conveyed without any cinematic fripperies, some of the scenes almost documentary in style. A great Sunday afternoon watch  and keep an eye open for Patrick McGoohans fleeting movie debut and a meatier role for a young Robert Shaw .