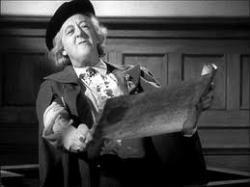 One of the very best of the Ealing comedies, the 1949 movie Passport to Pimlico (actually shot mainly in Lambeth ) is a film that answers most of the question: What is Britishness in just 84 minutes of comic genius . At the heart of the story is British adherence to rules and laws, in this case a charter granted by Edward IV and never repealed. Then comes seizing an opportunity, the Burgundian territory in London exempt from rationing. Stubbornness takes over when the authorities try to break the Burgundians  with the most famous line from the film summing it up: Its precisely because we are English that we're sticking up for our right to be Burgundians! And finally a sense of fair play, with Londoners throwing supplies to their beleaguered neighbours (an echo of what was happening contemporaneously during the Berlin Airlift) facilitating a very British compromise. All of which means we know how ridiculous we can be. Producer Michael Balcon always knew the cast in his comedies was everything: here the talent includes Joan Rutherford; Stanley Holloway ; Basil Radford and Naunton Wayne; Michael Hordern ; Sam Kydd; Charles Hawtrey; Barbara Murray; James Hayter (Mr Kipling and the best ever Friar Tuck) and Hermione Baddeley. Most directors would kill for just half that group or for a scriptwriter like Tibby Clarke (also responsible for The Titfield Thunderbolt and The Lavender Hill Mob) the master of logical absurdity.