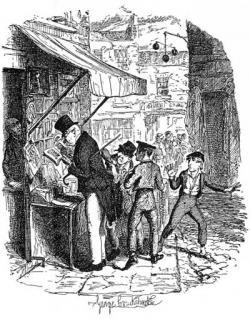 There have been many versions of Oliver Twist, and new ones continue to appear, but the best thus far is David Lean s 1948 release, which manages to stay reasonably faithful to the original novel while running only 116 minutes.
Lean had done Dickens two years previously with his rather scary Great Expectations , and with Oliver Twist he again chose to bring out the menace more than the charm: Alec Guinness is far from sympathetic as Fagin, and Robert Newton downright frightening as Bill Sikes  both of them were, however, at that time better known for comedic roles. In rather grotesque make-up including a hooked false-nose, Guinness caused some controversy with his portrayal of Fagin, some calling it anti-Semitic.
The two child-leads both went on to greater and different things in future: Anthony Newley who played The Artful Dodger as singer and writer; John Howard Davies, a vulnerable but somehow cold Oliver, producing classic sitcoms like Fawlty Towers , Mr Bean and The Good Life . As ever with old movies its fun and worthwhile looking out for others in smaller roles who did better for themselves later on: here youll spot Hattie Jacques and Diana Dors ; both as it were became much bigger stars.