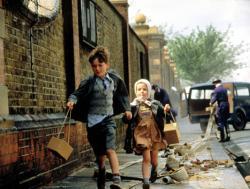 Directed, written and produced by John Boorman , Hope and Glory is a family matter in more ways than one: it is semi-autobiographical; a comedy-drama based on his childhood experiences in WWII ; and it features appearances by son Charley and daughter Katrine.
The idea of joy coming out of the blitz is novel, as is the thought of using war-torn skies as something beautiful, but the breaking down of barriers and suburban inhibitions, and the eventual destruction of a constricting environment that takes the Rowan family to the country home of crotchety grandfather Ian Bannen makes for something optimistic and enjoyable viewed from a pre-teenage boys perspective. Maybe the whole tale is symbolic of the eventual change and increased freedom of the post-war period compared to what went before.
Nominated for five Oscars (though oddly Sarah Miles was not one of them) in 1987 it won none, losing out in a year when The Last Emperor took nine (from nine nominations), that result not entirely surprising as vast panoramic movies tend to garner more than intimate and slightly quirky dramas.