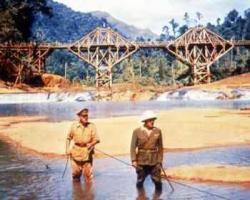 Bridge on the River Kwai

Bridge on the River Kwai is more accurately described as an anti-war film than a war film, depicting none too subtly at times  the medics line Madness, madness a case in point - the surreal nature of conflict, where honour and regulations can override logic and humanity. Made by Columbia Pictures, with American producer Sam Spiegel its guiding light, the 1957 film is nonetheless a British classic, with Alec Guinness in one of his finest roles  which is saying something, and David Lean , arguably the greatest director of epic movies, squeezing every drop of sweaty atmosphere out of his locations. All of the aforementioned won Oscars, as did Malcolm Arnold for his score. The contributions of editor Peter Taylor and cinematographer Jack Hildyard were vital in creating the look of the film, and they too received Oscars for their work, making the movie a lasting tribute to British cinematic craft. In our era of special effects driven movies it seems strange that such a painful drama could have been a commercial success, but it was big box office, aided by its Oscar haul. And the many who have seen it will put Alec Guinnesss walk from the metal punishment-box as one of the most sublime pieces of physical acting in cinema history.