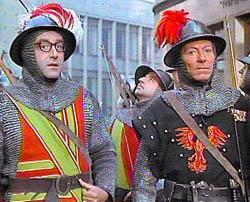 The Mouse that Roared

It is difficult to discuss the 1959 film The Mouse that Roared without mentioning two other films: Dr Strangelove and Kind Hearts and Coronets . The latter is famed for Alec Guinness playing multiple roles, setting a comic standard that Peter Sellers , also a veteran of Ealing Comedies, tries to match in The Mouse that Roared. Sellers repeated the exercise in Stanley Kubricks 1964 release Strangelove, which shared the theme of nuclear weaponry with Mouse, and as both were made in Shepperton Studios the link is hard to avoid.
But the tone of The Mouse that Roared is a world away from Kubricks movie. Strangeloves satire is a bazooka, Mouses a toy popgun wielded in the context of a charming and whimsical story about a tiny nation going to war with America in order to lose and receive aid. Sellers in three parts is backed up by some top character acting talent, most notably William Hartnell, Leo McKern and David Kossoff; and Jean Seberg thrown in as superfluous love interest.
The film has been criticised as lightweight, which misses a point: yes it is satirical, but it is meant to be an entertainment rather than a tract. Though the production is very British that entertainment sometimes comes across as American in style as Sellers times some gags more like Phil Silvers than Alec Guinness, though his portrayal of the Duchess is very Ealing.
Unlikely to top many film polls, the film nevertheless has not dated, and is ideal comic fare for a wet Sunday afternoon in autumn, all the time with its message about nuclear powers tickling the watcher as gently as the humour .