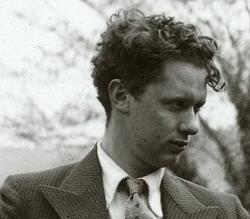 Thomas was the archetypal bohemian poet, intoxicated with life and liquor, impecunious and outrageous, dying aged only 39 and leaving some of the greatest poems of the 20th century.

Dylan Thomas was born at 5 Cwmdonkin Drive in Swansea on October 27, 1914. Here he would write over half of his poems as well as many short stories. Dylan was a sickly child suffering from the bronchitis which was eventually to contribute to his death. He left school aged 16 to work as a reporter for the local newspaper, his dismissal 18 months later coinciding with his increasing involvement with poetry and drinking. His first book 18 Poems written before he was 20 was favorably received in 1934 the same year he moved to London. Here he led a bohemian life mixing with the writers and artists of Fitzrovia. Augustus John introduced him to his future wife Caitlin McNamara whom he drunkenly proposed to on the spot. They were married in 1937 and set up home in Laugharne, Carmarthenshire. Although their marriage would produce three children drunkenness and infidelities on both sides were ultimately to destroy the relationship.

A Portrait of the Artist as a Young Dog, Thomass book of short stories, was published in 1940 and he spent the war years writing scripts for public information films. With the publication of Deaths and Entrances in 1946 Thomass career took an upturn. In 1950 he began the first of his lecture tours in America which provided him with much needed finances for his family, and enlarged his readership  President Jimmy Carter perhaps his most famous and perhaps unexpected admirer. It was the death of his father in 1952 which inspired his best loved poem Do Not Go Gently into That Good Night. Much in demand as a speaker and broadcaster Dylan continued to drink to excess and his final lecture tour in America terminated in the Chelsea Hotel. His death there on May 3 1953 seemingly caused as much by pneumonia and medical misjudgments as by alcohol. His masterpiece the verse radio play Under Milk Wood was published after his death in 1954, its mix of the comic, bawdy and profound his greatest memorial, most memorably narrated by fellow Welshman Richard Burton in 1963.

Contributors: Do you have a site related to Dylan Thomas?
Supply some content for this page and we will gladly add a link to your site. Email here.