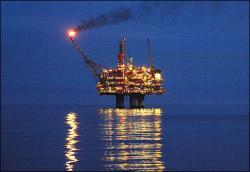 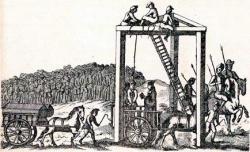 To Great Britain, finding oil in the North Sea was like finding an original Monet in the attic. That there was oil hidden underneath the frigid waters of the North Sea was as welcome as it was surprising. In the 1970s, the economy was struggling; the country was wholly reliant on OPECs oil, and it had a budget deficit that would send shivers down even the most hardened chancellors spine. British Petroleums prospecting was not in vain after all, and their success was most timely, coming at a time when Britains thirst for oil required two million barrels a day.
The 3rd November, 1975, was a gala day alright; it was the day the oil started pumping. It is a measure of how important the whole affair was that the Queen pushed the button that would start the production. Looking a little more demure than the average oil worker, she preferred an avocado coat with matching hat before putting her Royal digit on the specially commissioned gold button. Prince Andrew and Prince Philip were there  the latter on his best behaviour. It was that sort of day. Prime Minister Harold Wilson was there, too; a rare chance for a smile in a time shadowed by economic storm clouds. Assorted cabinet ministers aligned themselves like the brides family at a wedding; a £370 million government loan for BP was the dowry. For now optimism was the watchword, and not even the threat from the Tartan Army  radical Scottish nationalists  to destroy the oil pipeline spoiled the party.
Of course, the oil reserves were off the coast of Dyce, near Aberdeen in North-east Scotland; it was inevitable that they would become a nationalist argument. Their repeated efforts in the years leading up to the ceremony were enough to prompt Scotlands largest ever police operation. Factoring in the cost of policing, the gala dinners and HMs gold button, the cost of the ceremony ran to £500,000. Once the oil started to flow from Block 21/10, or the Forties as it was known, Britain was afforded a little autonomy outside of OPECs sphere of influence.
A harsh winter was about to set in over the North Sea, yet the prospect of more oil in the area had left all with a sunnier disposition. Up to a quarter of the nations oil consumption was to come from the Forties, and with the discovery of more oil fields the North Seas inhospitable expanse offered the nations economy some comfort at last.