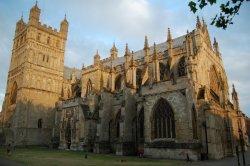 Did you know that Exeter Guildhall is the oldest civic building in Britain (1468) still in use today? Parts of it date to 1160, though it was altered and augmented in 1330, 1468 and 1591. Full council meetings and grand functions are still held there. Within is contained the oldest civic seal in England (1175).

Did you know that Exeter was unique in medieval Britain in that it had a man-made drinking water system that brought pure spring water into the city? There are passages still to be found under the high street that were excavated in the 14th century for this. The passages have become a tourist attraction, accessed via Paris Street in the Princesshay Quarter. The downside to the original system, by the way, was that it used lead piping.