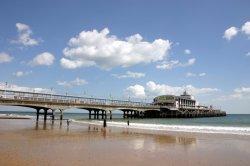 Did you know that in Bournemouth on 12th July 1910 Rolls Royce co-founder Charles Rolls became the first British man to be killed in an aircraft crash? He was a true aviation pioneer, having crossed the channel by balloon in 1906, and made the first two-way crossing of those same waters in an airplane only a month before his fatal crash . Rolls made more than 200 flights in his Wright Flyer, made under license by Short Bros. Perhaps that usage was the cause of its tail breaking off with deadly consequences for the pilot.

Did you know that Percy Shelleys heart is interred in St Peters Church , Bournemouth? Its arrival there was rather late: Percy Shelley drowned in 1822 while boating off Livorno; his body washed ashore and was cremated on the beach. His friend Edward Trelawny somehow grabbed the heart from the flames and presented it to Mary Shelley who kept it with her thereafter. It was only when his son, Percy Florence Shelley, died in 1889 that he and his fathers heart were both placed in the family vault.