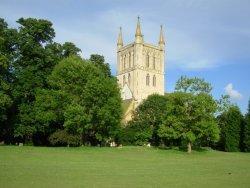 Jimmy Pickles
"It was our 30th anniversary and our first visit so we booked a table but when we arrived we had to wait while they rushed around to find a table ..." More

Plough & Harrow
"I cant comment on other peoples experiances I must of been on the same night as the one of the other reviews and myself and 4 others had a great ..." More

Plough & Harrow
"We had a birthday party, from start to finish it was fantastic, we booked on line and that was simple, we arrived and greeted by the owner which was inpressive, ..." More

In the heart of the Vale of Evesham some 10 miles south east of Worcester and 6 miles west of Evesham lies the small market town of Pershore. Sitting on the banks of the River Avon Pershore is renown for its Georgian architecture so much so the the Council of British Archaeology designated it as a town of architectural importance. But it is the Abbey that commands attention; it was founded in 689 by the King Oswald and in 972 King Edgar granted a charter which granted lands to the Abbey. The majority of the architecture is 13th century but there has seen much rebuilding over the centuries leaving the Abbey smaller than it once was. Pershore Bridge has also had a chequered past, disputes over its upkeep in the 12th and 13th centuries over its upkeep and partial the destruction during the Civil War in 1644 has left the present structure a mix of various dates. Agriculture is the mainstay of the local economy especially in hard stone fruit, and in the spring the area around the town is ablaze with white and pink blossom of plum, damson, apple and pear trees, these can be enjoyed on the well sign-posted "Blossom Trail". In summer, at nearby Wick, fields of Delphiniums dazzle the eye. Pershore is also home to the world famous Agricultural Collage which has built an International reputation for its courses and for the show gardens that it exhibits at RHS shows such as Malvern and Chelsea. August Bank Holiday is Plum Day in Pershore with many well known and not so well known Plums available to taste and buy including the Pershore Yellow Egg, which was found in the nearby Tiddesley Woods in 1827 by local man George Crooke. With boating and fishing on the Avon miles of pathways and walks up Bredon Hill to enjoy Pershore is the beating heart of the Vale of Evesham.

Places to Stay near Pershore

The Angel Inn Hotel is located in the heart of Pershore, an unspoiled, picturesque Market Town, famed for its elegant Georgian architecture, magnificent Abbey, and the beautiful River Avon where we have our own moorings.

Oaklands Farmhouse is an attractive period farmhouse built some 200 years ago. Although no longer part of a working farm, the house is located in the countryside between the market towns of Pershore and Evesham. ... More | visit website
map book

The Anchor Inn, Eckington can be found in the Vale of Evesham between Bredon Hill, the westerley outcrop of the cotswolds and the Malvern Hills to the west. It is ... More

Check availability and book this hotel online with Active Hotels

A superb quality hotel for business and pleasure and is within easy reach of Worcester, Cheltenham, and the Cotswolds. This impressive Grade II listed Victorian ... More

Days Inn have 14 great locations across the UK, our Tewkesbury hotel is ideally situated to be perfect for business, personal, families or just a quick overnighter if youre stuck. The Days Inn hotel in ... More | visit website
map website

We are a 16th Century English Country Inn on a former medieval anglo saxon site, we are situated in the middle of the Worcesteshire Countryside within easy reach of Stratford, Malverns, Cotswolds
We offer true English ... More | visit website

The Flyford is an independent family run inn, that is situated midway between Worcester and Stratford Upon Avon on the A422. The Flyford Arms offers a bar and dining areas ... More

Welcome to The Boot Inn, awarded AA 4 Gold Stars - only given to 10% of AA recognised establishments and Worcestershire Pub of the year 2009/10. A family run traditional Country Coaching Inn, parts of ... More | visit website