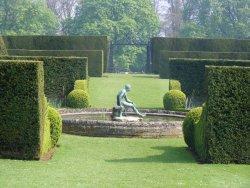 Great Gardens in Northamptonshire - Gaga about the Ha-ha?

Alright, so not every historic garden in Northamptonshire has a ha-ha wall, but we liked the title as indicating the glut of great gardens in that rather small county. A trip around the county indeed can provide an insight into our national obsession with gardening.
Northamptonshire is, contradictorily, little England writ large: at the centre of the country, within easy reach of the capital so a place where many of the wealthy chose in centuries past to build great houses (and gardens) but also touching the Midlands and East Anglia. It is easy to access too, served by the A1, M1, M6 and A14. This is a journey through time as well as around the countryside, touching on the horticultural legacies of our ancestors from medieval days to the present. And it is not just fixated on the parks and gardens around the stately homes of the ruling classes, encompassing too several humbler contributions to the greening of our land. In Nassington five miles or so north of Oundle the Prebendal Manor House is a good place to start. Elements of the house date back to Saxon times, though it is mainly 12th century. The gardens include one for pot herbs, plus medicinal, pleasure and even poison gardens providing a snapshot of medieval horticulture when the garden was part pharmacy, part store-cupboard, part entertainment.
Onwards to the first Elizabethan Age , and the National Trust-run Lyveden New Bield north of Thrapston. Some of us will be captivated by the old varieties of trees in its orchard, names from a time when the fruits they produced would have been an important part of the households diet. It is a rare example of a Tudor water garden too, with mini-canals and dramatic little spiral mounts. More intriguing, even in a literal sense, are two other aspects of the garden here, reflecting the then dangerous Catholic faith of its owners the Treshams (the house fell into disrepair after one of the family was involved  fatally - in the Gunpowder Plot ). Its labyrinth of 10 concentric circles once perhaps planted with roses and raspberries, though it may just have been mown is thought to have symbolic significance; its cruciform garden lodge certainly did.
From the same period, but on a grander scale designed to impress as it was once the home of a Lord Chancellor, rather than for simple family pleasure, the gardens of Kirby Hall north of Corby are in keeping with the house itself, one of our greatest Elizabethan survivals. The cutwork gardens have peacocks strutting among them, elegant (and in the 17th century expensive to maintain) lawns perhaps best seen from the house, and fine enough to have been used in filming a recent version of Mansfield Park.
But what about the ha-has I hear you cry. Castle Ashby , which is equidistant from Northampton and Wellingborough , will oblige. The gardens here were laid out by the great and seemingly tireless Capability Brown , complete with ha-ha, the hidden wall/drop that provided a boundary keeping cattle within a park without the need for view-spoiling fences or hedges. The gardens are open to the public while the house generally is not, but it is the gardens  mile long drive, enlarged ponds, cricket pitch and all  that capture the imagination here, transporting us back to the early Georgian age. Another ha-ha has been rediscovered recently in Great Billing Pocket Park in Northampton itself, and The Old Rectory in Haselbech near Naseby, which can be visited by appointment only, has another in its nine-acre park.
Canons Ashby House in the countryside west of Towcester dates from the same age, though the present landscape owes much less to the Georgian and far more to the Victorian era, which perhaps contra-indicatively given our views of the mourning queen and rather grim morality was in horticultural terms one that wanted to unleash colour.
Forward to the 1920s at the 10-acre garden of Coton Manor which sits near Guilsborough between Rugby and Northampton. At the right time of year its bluebell wood and wildflower meadow lift the soul, but whatever the season the smaller gardens, rooms, into which its estate is largely divided, give us a glimpse of post-WWI design. It is not hard to link this intimacy and containment with the psychological need for comfort after that appalling conflict.
Still closer to our own times is the garden of Kelmarsh Hall eight miles west of Kettering , designed in 1936 with additional work done in 1951. Again it has a wildflower meadow, though this is rather a grand mansion with grass terrace, pleached limes and an avenue of pink chestnuts some of its most notable garden features.
If you have limited time, you could do worse than head for Holdenby House between East Haddon and Church Brampton, where the gardens are a delightful stroll through various periods  Elizabethan, Stuart, even Victorian, with more modern aspects too.
Browse our pages for hotels , B&Bs , cottages and inns for a day or a week away from it all. Make a break of it and visit several of these life-enhancing spaces in a break in the very English countryside of this very English county. Drop the stress levels, sip a cup of tea or two, or reward yourself with a leisurely half in a village pub , Northamptonshire is full of them just as its full of beautiful and historic gardens.