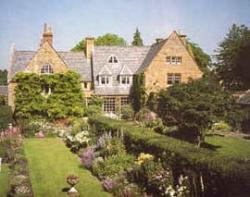 Coton Manor Garden is situated nine miles northwest of Northampton and occupies a hillside position overlooking unspoilt countryside. The garden was originally laid out in the 1920s by the grandparents of the current owner and gradually developed by the subsequent generations.

The ten acre site surrounding the 17th century house consists of a number of smaller gardens each with its own character providing surprises and contrasts as it gradually unfolds. Beyond the confines of the garden there is a magical five acre bluebell wood and a newly established wildflower meadow.