"Many a visitor has found that, whilst not treache...more 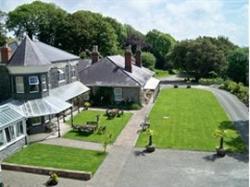 A restored Victorian country retreat on the outskirts of the historical township of Laugharne: famous for Laugharne Castle and more recently, Welsh Poet Dylan Thomas, who did much of his writing in the boat house.

The hotel has the benefit of being situated on the cusp of Pembrokeshire and Carmarthenshire, which means all the wonders of West Wales are on your doorstep: including Pembrokeshire National Park, Local them parks, Picturesque beaches, Rugged countryside and Pendine sands - the home of many land speed records.

Broadway Country House is set within 7 acres of woodland, with breathtaking views out over the Carmarthen Bay and beyond to Devon. The hotel buildings originated 300 years ago, with a new West wing and Orangery being added in 1914, which has recently been refurbished.

A family run hotel which specialises in weddings and functions with an experienced and energetic team, who take great care and pleasure in making your special day everything you could dream of.

Laugharne - Laugharne Castle a historic medieval castle where poet Dylan Thomas wrote in the Gazebo. Dylan Thomas' boat house is nearby which attracts visitors from all over the world.

Pendine Sands - where many land speed records are held. Tenby - is a town which is steeped in ancient history surrounded by an imposing stone wall, built in the 13th centuary. Through the passages of time, Tenby has seen many changes.