"A great little village, quite a steep road down -...more 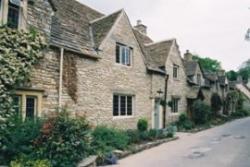 Castle Combe, frequently voted Britains Most Picturesque Village, is situated in the South Cotswolds, about five miles from the pretty market town of Chippenham, 12 miles from Bath and less than 100 miles from central London. The village houses, built of limestone with natural split stone tiles, are hundreds of years old and listed as ancient monuments. Castle Combe is a designated conservation area and remains blissfully unspoiled, with not even an outdoor TV aerial or street light to mar its charm.

The villages history dates back to Neolithic times, but the building of the Castle in 1140AD is credited to Reginald de Dunstanville. As the battles of the Norman period ceased, the fortified Castle became redundant and the Manor House was built during the 14th century. The Manor House is now a luxury hotel, with its own fine golf course, and its lovely grounds include West Street, a row of breathtakingly pretty limestone cottages of which the privately owned double-fronted Mead Cottage is possibly the finest. Within its 17th century stone walls, the cottage interior is a haven of style and comfort, decorated and furnished with impeccable contemporary furniture and total luxury: underfloor heating, stunning bathrooms, a huge shower, flat screen televisions and a fabulous kitchen.

There are numerous things to see in the village of Castle Combe such as the Museum, The Dower House, the Market Cross which is a historic centre piece of the village, the War Memorial and the Organic Farm Trail. The original site of the Castle is half a mile north west of the Manor House overlooking Bybrook Valley. Although the Castle no longer remains, the earthworks are still visible.

Outside the village there is a vast array of further local attractions, all within easy reach of Mead Cottage.