"Saturday is market day in Bridgnorth and it can g...more 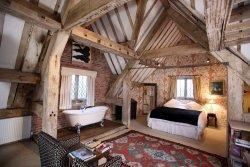 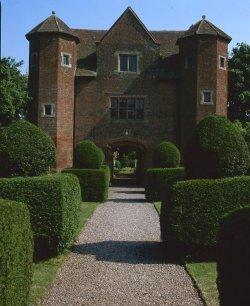 The Gatehouse at Upton Cressett Hall, near the market town of Bridgnorth, is set in beautiful Shropshire countryside and is one of the most romantic and spectacular gatehouses in the country, often compared to the Tower at Sissinghurst Castle in Kent in which Vita Sackville-West created her library and wrote her many books. Prince Rupert stayed in the Gatehouse during the Civil War and the panelled bedroom he slept in is named after him. This unique and historic self-contained property is available to rent either for romantic short-break weekends (minimum two nights), by the week, as well as over holiday periods. A special 'Prince Rupert Mini Break' package for a two night stay, including butler service, champagne drinks, and a gourmet four course dinner and wine served in the Tudor dining room is available for special occasions, including honeymoons, birthdays and and wedding anniversaries. The Gatehouse, which has been described as the 'most romantic little castle in England', is ideally suited for exploring Heart of England and near Ludlow, the gastronomic epicentre of Britain. Local attractions include Katherine Swift's famous Dower House garden at Morville Hall, as featured in The Morville Hours, as well as the Severn Valley Railway, Ludlow Castle, and the ruins of Wenlock Abbey in Much Wenlock, voted the second prettiest town in England. The property has recently been refurbished to a luxurious high standard with all modern comforts  including new Lefroy Brooks bathrooms, designer kitchen, satellite television and underfloor heating  that blend in with such historic features as original carved oak spiral staircase, mullion windows, ornate sixteenth century plasterwork, Tudor fireplaces, oak floors, panelled bedchambers and half-tester beds. The beamed dining room has a hand-painted Tudor ceiling and an original European refectory table which seats ten. Built in 1580 as an entrance to the moated manor of Upton Cressett Hall, the turreted Gatehouse  with bedroom suites on two floors giving privacy and making it ideal for two couples or a family  - has been featured on the cover of Country Life. In his acclaimed book Best Houses of Britain, Simon Jenkins described the Gatehouse as 'an Elizabethan gem'. There is a long-standing tradition that the young princes, sons of Edward IV, stayed at the early manor in 1483 on their fateful journey from Ludlow Castle (some 17 miles away) to the Tower of London; others who have stayed in the Gatehouse as well as Prince Rupert include English prime ministers. The imposing Gatehouse has its own entrance gates which lead into a medieval apple garden with a fountain that evokes the atmosphere of the Elizabethan Age when Richard Cressett built the Gatehouse during the reign of Elizabeth I. The Cressett family were long-standing royalists who were closely connected with the royal court. Richard Cressetts grandson, Sir Francis Cressett, was Treasurer to Charles I and was one of the men who tried to rescue the king from Carisbrooke Castle in 1648.