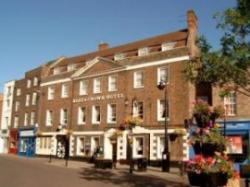 Add your review
Good Points: Staff o.k., Wireless internet. Bad points: Very slow and poor service. Noise - Fire doors slam along corridors during the night. Food poor. Car park very tight, my car was damaged. Unfortunately I did not notice until morning after the visit, half way home when I stopped for petrol. My advice would be to find somewhere else.

Add your review
Hotel has a very tired look and is in need of total refurbishment. Over indulged (drink) men littered the courtyard making the already full very small carpark an unsafe area to leave the car. Staff at breakfast were very friendly but reception area left a little to be desired! Our stay was cut short due to hammering and drilling through the night,( we were not informed on booking ) which we later found out was coming from all night workerforce on the Nationwide Bank renovations. We had little sleep and as the visit to Wisbech was to be at my brother funeral some sleep was very important. I could not recommend the Rose and Crown at this point in time. We have an old coaching house hotel in Lichfield " The George Hotel " run by Best Western. Maybe they should take over and inject some life into the establishment! Price to pay for cancelling our second night, we had to pay half price after insensitive discussion. Advertised as 3 star...no way..!!!!

Add your review
Good Points: the food was good and staff very good Bad Points: there was no heating in the rooms it was very cold we were not told this

Review by Christopher on 26th September, 2007

Add your review
Good Points: It was a character hotel in a beautiful town. The listed nature of the building. Bad Points: Room: No shower, peeling wallpaper, none working plug sockets, a powered television ariel box that was 'hanging' from the plug socket and television.