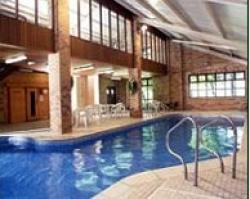 Add your review
Just back from a long weekend with all my family having stayed at Knockerdown cottages. Had a fabulous time but very disappointed with the Farmhouse, it is a good size and accommodated the 11 of us plus a baby quite well but it was very dated. It is not cheap to rent the 'Farmhouse' and really needs updating. Lounge cramped with uncomfortable settee's, 2 very uncomfortable mattress's on beds. Only one bathroom & again very dated, old fashioned shower. Downstairs shower room again very dated, needs an en-suite for the money charged for this accommodation. Television old, remote cellotaped. All in all knockerdown nice place, pool lovely but would not recommend staying in the ''Farmhouse'

Add your review
We had great week here despite some varried August weather. We stayed here 10 years ago and returned with children aged 11 and 8. The cottages are very well fitted out, the nicest we have stayed in, and there are not too many on the site. There is a good children's play area and a field to play on just beyond. There is a pool on site wich not huge but big enough for purpose. You can use the games room (pool table and table tennis) and borrow board games and dvds/ videos. There is a launderette, restaurant and a spa on site. The pub opposite is very good and also has a play area (book a table on Friday as it gets very busy). Carsington Water is just down the hill and there are shops, a reataurant, cafe and watersports there. The watersports centre did some very good value taster sessions and we did canoeing and sailing while we were there (they also hire bikes). Lots of other things to do locally with the Dovedale, Alton Towers and Matlock Bath all close by. I would reccommend this as an alternative to a British seaside holiday.

Add your review
After a really poor weekend's weather prior to leaving, we woke up on the Monday of our hols with glorious sunshine, albeit cold, as we drove to Knockerdown Farm. The keys were just as Tina had arranged, and the cottage, Wisals, was just what the doctor ordered. It was clean, comfortable and ideally situated. Facilities were great, pool was relaxing, and we would thoroughly recommend the place. Book now! You won't be disappointed

Add your review
Me and a friend went here to get away from our stressful lives,after not having a break for years,and we were dead chuffed with what we found.We loved it straight away and our cottage. There was a problem with a fuse when we got there so all electrics went out and,although we were given torches and hot water etc,it meant that we had to go out to eat which we would rather have avoided after a long drive and couldnt use the pool either. That night a family above us were unbelievably loud late into the night and early next morning and,as they were there another night,we asked to move and got moved without any hassle which was great.Tina,the Receptionist was very helpful. The adjoining restaurant was fantastic.We ate there one night and the food was delicious.The spa that was also there was great too and the staff at both were friendly.The spa and restaurant attracts alot of locals so better to book before your break. The road being nearby didnt bother us at all and it was really easy to reach all tourist areas with Carsington water literally being just opposite. The pool was lovely although the rule of no Children under 16 being allowed in there alone was totally ignored and not upheld and so there were kids causing havoc. All in all we were very impressed though. However,despite having every intention of returning the Manager/Owner put paid to that as,on the morning we were leaving,he was very rude to us twice with no need whatsoever.We mentioned it on leaving but got no satisfactory response from Tina and so I e mailed politely when I got home in the hope that I would get an apology or something so that I could return as I had enjoyed it so much but never heard back so I shall not be going back or recommending it to anyone else. The owner or Manager,whoever he was,is a disgrace and clearly only cares about the money.

Add your review
We (my husband and I and our seven month old baby) spent a week at Knockerdown farm with my parents. Their cottage (Edale) was very nice with a lovely view over the field at the back. Ours (Ible) which is cheaper, was very dark and somewhat in need of refurbishment (eg shower held together with elastic bands). However the kitchen was well equipped and there was plenty of space for the three of us. The site is very close to a major road which makes having windows open at night unappealing. The children's play area is good, although more suitable for slightly older (five years +) children. The pool is lovely but the changing areas and showers are dire. This would probably be a better location for families with primary school age children who would be able to take full advantage of the facilities, as the cottages are on the expensive side for the standard of accommodation provided.

Add your review
The cottages are arranged around gravelled courtyards which have a disappointingly car park like feel for something in the middle of the countryside. This is not helped by the proximity to the road, which during the day is busy and produces a lot of noise (generally not audible in the cottages). Our cottage was dark small and smelly. However there were others on the site that looked a lot bigger. It was not a good place to spend time - which was a shame given the amount of rain we had! Swimming pool was good and the children enjoyed there time playing here. I found it too warm to swim in for long (the first time I can ever remember being bothered by a pool being too warm). My wife found the temperature of the pool a particular positive. Games room equipment had seen better days but was sufficient to interest our younger child. There is a restaurant on site though it doesn't particularly seem to encourage trade from the cottages. It didn't attract us so we didn't explore further. Its worth noting that some of the cottages are close to the extractor fan outlet from the kitchen to this restaurant and the smell is intrusive. The staff were friendly and helpful - although only around for part of the day. The cottages are well positioned to explore the area. Overall I would not be inclined to return.

Add your review
Just returned from great weekend at Knockerdown. Initially the booked cottage turned out to be cold and small, but our request to move was accepted without question and the 'new' cottage was superb. We have now booked again for next summer and can see ourselves returning many times.

Add your review
Second year running we have spent New Year here & once again everything was in excellent order - we shall be returning.